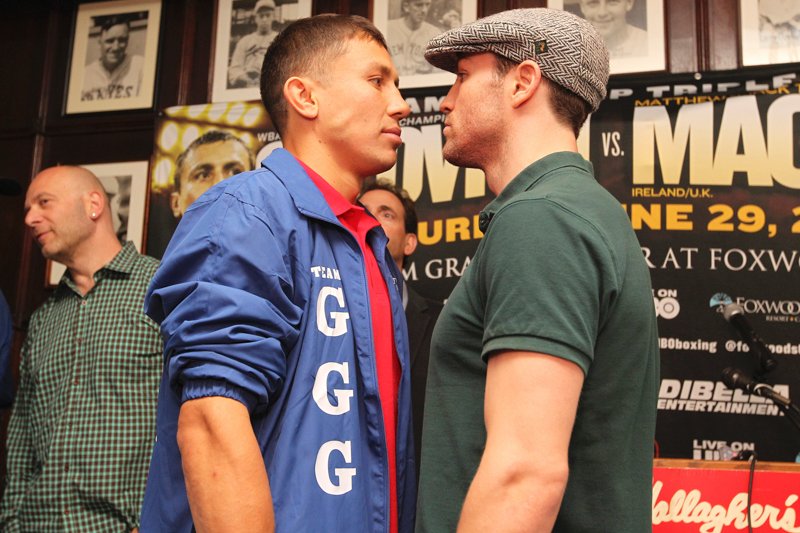 This Saturday, HBO boxing will be live from the MGM Grand Foxwoods Resort in Connecticut. They will be presenting a bout for the IBO and WBA Middleweight belts as the titleholder, “GGG” Gennady Golovkin will step into the ring against Matthew Macklin. This is the type of fight that even if you don’t think Macklin will win, you will still tune in to watch 1 of the most feared men in boxing, the man known as the boogeyman, Gennady Golovkin.

Gennady Golovkin comes into this fight with a record of 26-0 with 23 KOs. He will be fighting his 3rd fight in the US for his career. In his previous 2 fights in the states, he didn’t waste much time as he defeated Grzegorz Proksa by 5th round TKO and then defeating Gabriel Rosado by 7th round stoppage by Rosado’s corner. He’s an extremely hard hitting KO artist from Kazakhstan and currently resides in Germany. Because of his improving boxing skill and immense punching power, he sometimes can find it hard to find a valid opponent that wants to step in front of him.

Golovkin has said he can fight from any range of weight from 154 all the way to 168, which opens up a few options for him, including Trout, Cotto, Lara, Canelo, Ward, Chavez, etc; the only problem seems to be, how many of those guys actually want to fight him. The 31 year old Golovkin is already gaining a reputation as 1 of the most avoided guys in the sport, and after the punishment he put on Rosado’s eye and the KO he had on Ishida, it probably did help his cause in the department of finding opponents. Hopefully he will continue to just provide dominating efforts and force his way into the big money fight he deserves.

The man from the UK, Matthew Macklin, will enter the ring with a 29-4 record with 20 KOs. The also, 31 year old best 2 efforts were a close loss to Felix Sturm and putting up a good fight early, but eventually losing to Sergio Martinez after not coming out of his corner after the 11th round. Macklin has yet to get that signature victory that would put him in the top 5 middleweights in the world. He will walk into Foxwoods as a not only a clear underdog, but a person that most people won’t even expect to make it halfway through the fight.

Macklin will try to shock the world on Saturday, and to do that he will have to fight almost the perfect fight. He has to have good movement, he has to use his jab, and he has to make sure that Golovkin has trouble with getting to the distance he wants to get to. Macklin will not only have to use lateral movement, but also inside and out movement. It is an extremely difficult task for him, but if it was easy to do, everyone would have done it in the past. Hopefully he can avoid that big shot that Golovkin’s opponents always seemed to get caught by eventually at some point during the fight.

My pick in this fight will be no surprise. I will be picking Golovkin to stop Macklin in the 8th round. The reason I’m going with a later round is because Macklin will probably use a high guard to protect from an early KO, and Golovkin will go to the body as Macklin is eventually chopped down from the accumulation of body shots. If he doesn’t use a high guard, this could be over in the 1st 3 rounds, so it’s more of a pick your poison for Macklin. As I said earlier, no matter what happens on Saturday night, whether the world is shocked or Golovkin does what he does, it’s a fight that all fight fans should have a pleasure watching, enjoy the fights.