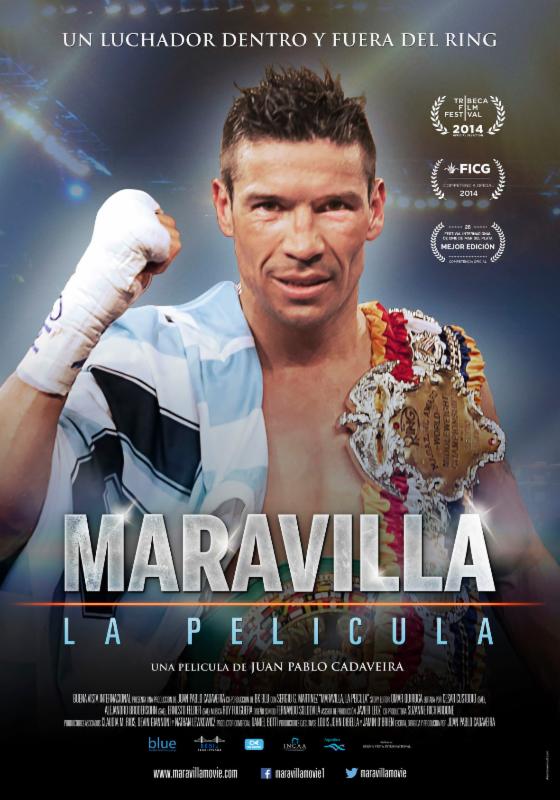 New York (May 29, 2014) –  After premiering at the Tribeca Film Festival and finishing as one of the top ten films for the Heineken Audience Award, “MARAVILLA” continues on to Argentina ahead of the Sergio Martinez’ championship bout against Miguel Cotto. The documentary chronicles Martinez’ journey to regain his title, which he will defend against Cotto at Madison Square Garden on June 7, 2014. The 80-minute character-driven documentary opens today, Thursday, May 29, 2014 in theaters across Argentina, distributed by Buena Vista International (Disney).

The hometown hero’s face can currently been seen all over on the streets of Argentina in the movie poster designed for the Argentina release. The champ is seen with his fist in a hand wrap and a belt slung over his shoulder with the language in Spanish.

First time directorCadaveira, shot the film over two years in four countries: Argentina, Spain, Mexico and the United States, and in many different cities, from Quilmes to Las Vegas, via New York, Atlantic City, Los Angeles, and Mexico DF.

Producers are currently in discussions regarding U.S. distribution. “MARAVILLA” is produced by Blue Production Co. and BK Blu Productions. Written and directed by Juan Pablo Cadaveira and executive produced by Lou DiBella and Jamin O’Brien.

“MARAVILLA” official film trailer can be viewed and shared by accessing the following link: http://www.youtube.com/watch?v=m5UfkYbMk