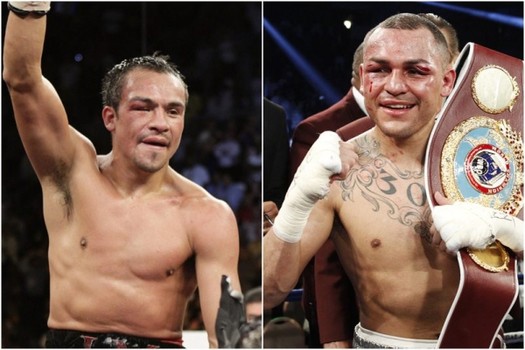 Two of boxing’s top warriors make their 2014 debuts when WORLD CHAMPIONSHIP BOXING: JUAN MANUEL MARQUEZ VS. MIKE ALVARADO is seen SATURDAY, MAY 17 at 10:15 p.m. (live ET/tape-delayed PT) from The Forum in Inglewood, Cal., exclusively on HBO. The HBO Sports team will be ringside for the event, which will be available in HDTV, closed-captioned for the hearing-impaired and presented in Spanish on HBO Latino.

After a nearly two-decade absence, HBO cameras return to The Forum – the site of the first “HBO Boxing After Dark®” telecast in 1996 –  when Juan Manuel Marquez (55-7-1, 40 KOs) of Mexico City and Mike Alvarado (34-2, 23 KOs) of Denver clash in a 12-round welterweight world title eliminator set at 143 pounds.

A devastating right hand in the sixth round of his Dec. 2012 bout against Manny Pacquiao made Marquez the year’s unanimous knockout king. That heralded victory earned him a shot at Timothy Bradley Jr. and the welterweight title, but he subsequently lost to Bradley in 12 rounds by split decision. Now Marquez, 40, returns to The Forum, where he first showed promise as one of the sport’s future superstars, with a chance to build upon his already extraordinary hall of fame-worthy legacy.

Alvarado, 33, was responsible for some of the most captivating moments of the 2013 boxing season. Last October, he lost his 140-pound belt when he submitted to the referee’s stoppage against Ruslan Provodnikov. As he moves up in weight to test his abilities in the welterweight division, the veteran’s passion is the key to replicating the form that inspired “fight of the year” performances against Brandon Rios in 2012 and in their 2013 rematch.

“2 Days: Sergio Martinez,” which debuts immediately following the boxing action (12:30-12:45 a.m. ET/PT), chronicles Martinez’ return to his home country of Argentina to prepare for his title defense against Martin Murray in April 2013. Martinez will again defend his middleweight crown when he faces former three-division champ Miguel Cotto June 7 at Madison Square Garden, to be carried live on HBO PPV.