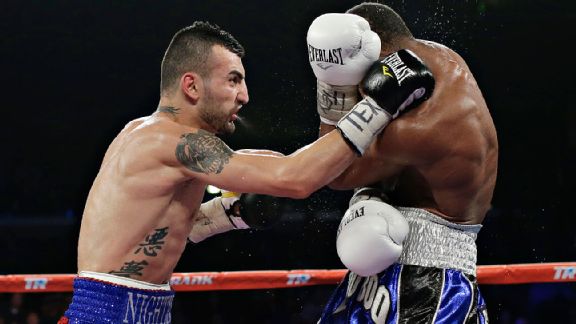 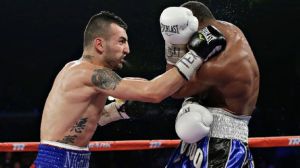 The fight opened up with both fighters coming out aggressively with Willie Nelson coming forward and putting pressure on Vanes Martirosyan driving him to the ropes at times. In the second round, Martirosyan started to work off his jab and use his legs more.  Meanwhile, Nelson continued to stalk forward applying pressure.  In round three, Vanes Martirosyan continued to box from the outside and work off his jab but also started to counter punch very nicely.  Many times when Nelson through his jab, Vanes would counter over the top with a right hand.  He was also making very good use of his uppercut which we haven’t been accustomed to seeing.

In the next few rounds Vanes Martirosyan got into a nice groove continuing to box from the outside and moving his head and working off the jab and throwing combinations.  He was also continuing to counter very effectively as Nelson kept coming forward trying to apply pressure. Martirosyan was also mixing in body shots very nicely against his taller opponent.  During these middle rounds Nelson’s punch out put started to drop a little bit.

Towards the end of the fight it became more of an inside fight  with Vanes outworking Nelson to a certain extent but still getting caught with a few big shots at times.

Vanes Martirosyan ended up winning a clear but hard fought decision and showed some things in the ring that we normally don’t see from him such as good head movement and countering and being disciplined in following a game plan.  As for Willie Nelson, he continues to not take advantage of his height and reach.  He has to start using his jab and learn how to be more versatile.  Willie Nelson drops to (23-2-1 13KO’s) while Vanes Martirosyan improves to (35-1-1 21KO’s).