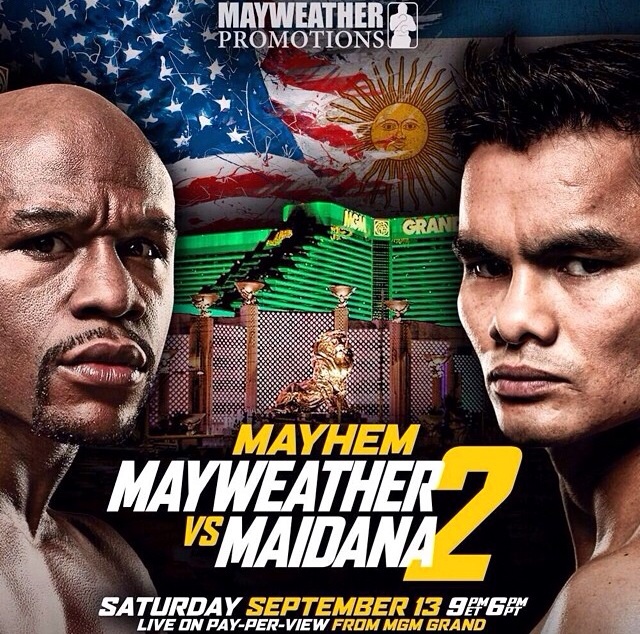 Just moments ago pound for pound king Floyd Mayweather announced who his next opponent is going to be for his September 13th return. No other than relentless Marcos Maidana who he faced back in May and won a majority decision against. To the casual fan it looked as if Maidana easily picked away at Floyd and deserved the win, but to any other boxing fans eyes Mayweather once again prevailed and took another decision home, regardless we now have a rematch set in stone.

Mayweather made clear not too long ago during an interview that his next opponent would indeed be Maidana but very few people thought to believe that he would announce his next fight in that type of manner. Not too long after Maidana took to social media to say that a rematch was indeed in the works, thanking Floyd Mayweather and calling him a man of his word.
In their first fight back in May, Maidana came out fighting similar to the way he fought Adrien Broner, smothering Floyd and trying to hurt the pound for pound king, it made for an exciting fight. Controversy also sparked the day before when it was apparent that Maidana was unable to wear his custom Everlast gloves. The fight was threatened be canceled unless Maidana agreed to the gloves that Mayweather wanted him to wear. Nonetheless the following day a agreement was met and Maidana wore the gloves Mayweather’s team wanted him to wear and of course taking a $1.5 million payment from Floyd in order to follow through with the agreement.
The gloves Maidana wanted to wear were similar to the ones Cotto wore when he fought Floyd. A custom glove that is padded with horse hair, but Mayweather insisted that there was no type of padding inside the gloves and refuse to let Maidana wear them.

The rematch is Floyds fourth fight with his Showtime contract, leaving two fights left before he is set to retire. He also made note that he had a big surprise for us in May. That could really only mean, a fight in New York being that he now has a promoters license there. It will spark people to believe he will rematch Miguel Cotto, the new Middleweight champion since a Pacquiao fight is definitely ruled out. Mayweather’s pay-per-view numbers since signing with Showtime have not been all that great. His only fight under the agreement that did very very well was his showdown with Canelo Alvarez, which generated more than 2 million pay-per-view views. This card will definitely need a solid undercard in order to get at least 1 million views if not more than that.
One fight rumored to be on the card was Lucas Matthysse against Adrien Broner, but in previous days both parties have denied the rumors and Broner has taken to social media to say that he would possibly return September 6th, but Matthysse Is still a strong possibility on the card. You can also expect to see JLeon Love fighting on the card as well.