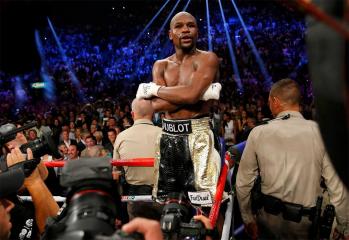 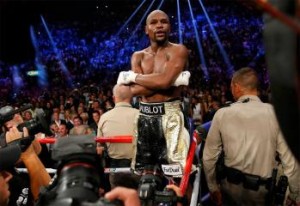 George Groves (23-2 16 KO’s) on Sept. 12 will challenge Badu Jack (19-1 12 KO’s) for Jack’s WBC super-middleweight championship on the undercard of the highly criticized fight between Floyd Mayweather and Andre Berto on Showtime PPV. It will be Jack’s first title defense and his toughest test to date as Groves represents the highest caliber fighter Jack has ever faced.

A huge stage for both fighters this is something Groves is very used to. His last title fight against Carl Froch filled around 80,000 seats in Wembley Stadium in his hometown of London UK. Groves fight against Jack has been touted around the boxing world (especially amongst hardcore boxing fans) as “the real Main event”. Alluding to the fact that this matchup seems more evenly competitive which would lead to better action, and we all know ‘action’ is a word that you can exclude from some of Floyd Mayweather’s fights.

After the initial press conference for the entire lineup for Mayweather vs. Berto, Groves caught up with Tha Boxing Voice’s Fernando Pimentel to give his views on the criticized main event. Groves gave his initial take during the interview saying.

“You can’t deny that Floyd “picked” him, he said it three or four times that he “selected” Berto, he’s got to have his reasons,” Groves said.

“I remember years ago when Berto was scheduled to fight Shane Mosley, and I was supposed to be on the undercard that was when I was real excited about Berto.

“The fight is under scrutiny. but let’s be honest, Mayweather is what he is – he’s a fantastic fighter, you get what you pay for, and you expect a master class of boxing, and you expect Berto to try to figure out what no one has figured out.

“I’m looking for it to be a great fight and by all accounts it could be Mayweather’s last fight.”

I’m sure Groves was being politically correct in not spewing negativity on a main event where he is featured on the undercard. Although most would agree that this fight between Mayweather and Berto is the quintessential “Cherry Pick,” if you look up ‘Cherry Pick’ in the dictionary, I’m sure this fights picture would be posted.

An even bigger slap in the face is that us fans have to shelve out money for pay-per-view. The majority of fans are not interested or do not believe Berto poses a threat and for good reason. The excuse for Mayweather is that he has given us the fans the fights what we wanted.

He fought Canelo; he fought Cotto, and he fought Pacquiao so why does he have to continue to be tough? I answer that question with this, it’s because he is calling himself ‘THE BEST EVER!’

When you add that moniker to your name, we expect you to carry yourself as such.