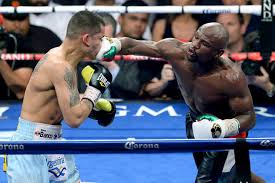 SHOWTIME Sports® will peel back the curtain on last Saturday’s rematch between Floyd Mayweather and Marcos Maidana and offer fans a unique glimpse into the drama and controversy surrounding the boxing event of the year with the premiere of the rematch this Saturday on SHOWTIME®, immediately followed by ALL ACCESS: Mayweather vs. Maidana 2 Epilogue. From the debate surrounding the infamous bite to the questions of clinching and roughhousing tactics, viewers will get an inside look at fight night and the rarely seen aftermath of world championship prizefighting. Don’t miss the fourth and final installment of the acclaimed series ALL ACCESS and the SHOWTIME premiere of Mayweather vs. Maidana 2 and Leo Santa Cruz vs. Miguel Roman, beginning this Saturday at 9 p.m. ET/PT.