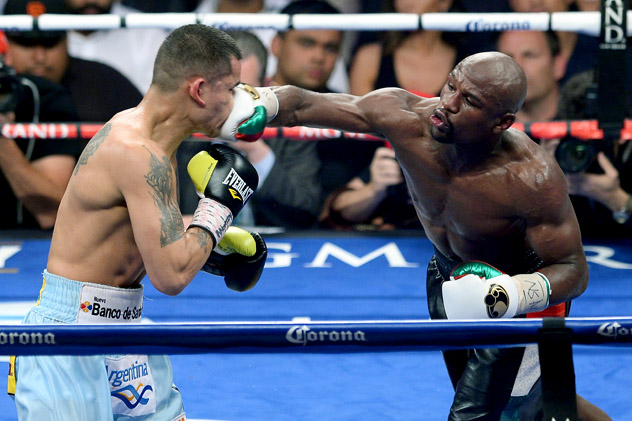 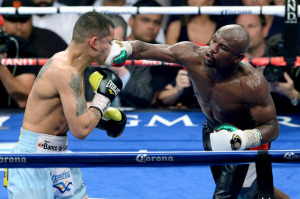 Boxing fans, it’s that time again. With all PPVs we have seen this year, it seems to have watered down the sport, but two PPVs you can always count on, barring him being on retirement, is Floyd Mayweather fighting the 1st week in May and the 2nd week in September. This Saturday, Showtime PPV will be live from the MGM Grand in Las Vegas to host the rematch of Floyd “Money” Mayweather vs. Marcos “Chino” Maidana in the event that has been coined #Mayhem2. Not only is this fight for the same WBC Welterweight and WBA Super World Welterweight Titles, but the WBC has also said this will also be for the WBC Light Middleweight belt, which is weird, but another story in itself.

The now 37 year old, Floyd Mayweather, will be stepping into the ring that is practically his at this point, with an unblemished record of 46-0 with 26 KOs. He has not stopped anyone since the Victor Ortiz debacle, and legitimately hasn’t REALLY stopped anyone early since Ricky Hatton, which was pre-retirement in 2007. At this point in his career he is still one of, if not the most technically skilled fighter in the sport, but as every fight passes by, the question must be raised of when will his age catch up to him. Floyd may also be feeling this, as he has recently said that as of now, his last fight will be September of 2015, which is when his 6 fight deal with Showtime, worth approximately 240 million, runs out.

It is pretty well known that after this fight, Floyd’s final two fight dates, if it is truly his final fight dates, will be May 2nd, 2015 and September 12th, 2015. However, I still find it hard to believe that someone with the nickname “Money” will walk away from another, let’s say, two fight deal, worth 80-100 mil. Mayweather definitely would like to keep that 0 in the loss column, but whether it’s Showtime or a reunion with HBO, that much money for one more year is going to be pretty tough for anyone, much less someone with the spending rate of Mayweather, to walk away from. However, all of that retirement talk is still a year away. We’ve still got a lot of fights before that.

Marcos Maidana (35-4 with 31 KOs) will get a 2nd opportunity at what most people would call the opportunity of a lifetime. He gets a chance to put a one in the loss column against arguably the most disliked fighter in the sport. His wild, go for it, style seemed to work well in the 1st fight. By most accounts from reporters, he won three or four of the 1st six rounds, however, the constant relentless pressure seemed to wear Maidana out more than Mayweather and the 2nd half of the fight went mostly towards Floyd.

Maidana, along with his trainer Robert Garcia, plan to have Maidana have more endurance and stamina this fight, which could help him continue the style that seems to be the only way to get by the Mayweather defense. Mayweather blamed dirty tactics by Maidana as to the reason why he didn’t look good in the 1st fight. Tony Weeks was the referee for that fight, while this one will have Kenny Bayless between the two men. The three judges that will score this fight will be Dave Moretti, John McKaie, and Guido Cavalleri.

When all is said and done, it’s hard to ever go against Mayweather period, much less in a rematch. Even though I do sometimes get a weird feeling that this can be it, this can be the fight where he gets caught, I still think Floyd finds a way to get by this fight and moves on to what he called a “surprise” in May. However, Maidana has power, everyone knows that, and in boxing we all know all it takes is one punch. Equilibrium can be thrown off, internal damage can take place, and careers can be made a ruined. The most intriguing thing about Floyd Mayweather fights are that everyone expects him to win, but you always watch because you don’t want to be the person who misses if he DOES lose. Well we’re all at that point again, boxing, gotta love it. Enjoy the fight.