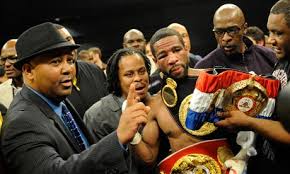 Despite IBF Light Welterweight Champion Lamont Peterson (32-2-1, 17 KOs) previously having some difficulties making weight at 14,  he explained to Tha Boxing Voice that it wouldn’t be a problem to do so again, “It don’t make a difference, whatever opportunity comes, I’ll jump on it, whether it’s at welterweight or junior welterweight.” When asked to give a prediction if a fight between himself and Danny Garcia happens he simply replied, “I’m gonna win the fight, point blank, I can’t sit there and tell you, this gonna happen and that gonna happen. I’m gonna win.”

Both Peterson and Garcia have been heavily criticized for the level of their last opponents (Rod Salka and Edgar Santana) when they both fought on the same card, but a fight between the two of them would be well received, unfortunately it doesn’t necessarily look as likely as it once did though with Garcia being named as a future possible opponent for Manny Pacquiao, however he has a fight coming up himself against Chris Algieri, an opponent who Pacquiao’s coach Freddie Roach has already made the mistake of looking past before.