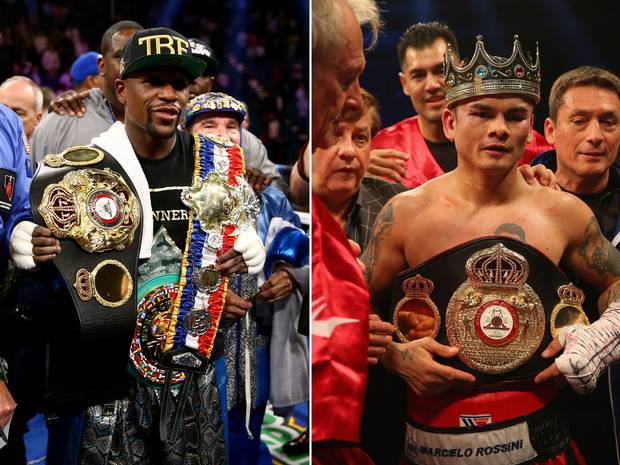 You would want to think that the proverbial underdog Maidana at least has a puncher’s chance in his bout with pound for pound superstar Floyd Mayweather Jr. He does but can he land that punch, notably the overhand right on Mayweather the same way he did Adrien Broner. Can he have Mayweather reeling like he did Amir Khan or come from behind to win like he did Ortiz. If he lands, will he finish? He can finish but the panelists here at ThaBoxingVoice.com see this fight going one way, Mayweather’s way. See how we think this fight goes down Saturday night.

Mayweather will do what he always does but I believe this fight will have a very high dramatic point. I believe Maidana will land a big punch maybe even drop Mayweather.

Marcos Maidana definitely has a puncher’s chance. He has made great improvements under Robert Garcia tutelage and Alex Ariza’s conditioning program. But that still won’t be enough. Mayweather is faster, has better reflexes, and is still the best defensive tactician in the game. Mayweather by stature should also has the reach and height advantage to keep Maidana at a distance, a distance to where Mayweather wants to fight. Maidana may have his moments and won’t mail it in like Robert Guerrero but i see Mayweather too efficient and winning this victory by stoppage by the ref as Maidana will eat too many counters for his own good.

Mayweather over Maidana by decision. It will be a better fight than expected. Mayweather will do what he does best and Maidana’s come forward style will give Mayweather some issues especially if Chino fights the way he did against Broner., ill be entertaining for sure.
Danny Gonzalez: Mayweather
This main event is going to be one of those fights that are going to be even greater a mismatch in the ring as it was on paper. Maidana in undoubtedly viewed as the hero here, but his narrative is one we have already seen before.”Can a fighter with one-punch knockout power be the first to get rid of Mayweather’s ‘0’? Spend $70 and find out!” Mayweather has already proven himself against these types of foes, and quite frankly, against some who were more complete fighters than Maidana. Still, Maidana will do his best to make it exciting early knowing that he will not win a decision while Mayweather is still standing. It will be bombs away early and often, but Mayweather will pick his spots and capitalize on the hard-charging Maidana to cruise to a one-sided decision win.

Marcos Maidana is a great fighter who has proven over his last few fights since training with Robert Garcia that he is an elite fighter and has just as much chance of beating Mayweather as anyone else does. The problem is, that chance is little more than the hope of landing a lucky big shot on Floyd. In my opinion none of the absolute best fighters in any division from 140-160 have a chance to beat Mayweather. It has nothing to do with size, strength, or anything physical. It’s a mental edge that only experience can teach you that Mayweather has over all his opponents. Much like current 175lbs unified champ Bernard Hopkins there is no style or way of boxing that he hasn’t already dealt with. But unlike Hopkins who largely because of age can be out worked as he almost was by Psacal or outboxed as he was by Dawson, Mayweather stands no chance of being the victim of either as he has shown that even fighters 10+ years younger (Canelo, Ortiz etc) or extremely skilled boxers (Marquez, Cotto, even Guerrero to a certain extent.) can’t even come close to beating him. So even given the current wave of success Maidana is riding, a punchers chance won’t be enough to stop the smartest fighter in the game and probably history so I’m going with Money May by late TKO or decision.

Jeff Rufino: Mayweather Decision
I don’t even know why we are picking for this fight.  It shouldn’t really be called “The Moment”, it should be called “The Déjà Vu”.  Floyd Mayweather, statistically the best defensive boxer of his era, facing a come forward fighter coming off a win that makes him seem invincible.  I don’t think Maidana could catch Mayweather with a jet pack on.  This fight will be dramatic in that everyone will be waiting for a flurry from Maidana that will never come.

Easy fight for Floyd. Maidana will try and attack early but Floyd will counter and pick him apart as he does with all fighter who don’t poses the speed to catch him early nor the stamina to catch him in the later rounds. Mayweather by unanimous decision

After an overly aggressive Maidana pressures an understandably passive Mayweather for 3 rounds, Mayweather will begin to find more and more openings until each round kind of blends into one another, at which point Maidana will become just another causality to go along with the other 45 that came before him, not to mention the millions of causalities that decide to watch.

Unfortunately, like almost everyone else I view this weekends ppv main event as a complete mismatch in favor of Mayweather.  Floyd has already defeated many fighters who are better then Maidana and he hasn’t shown any signs of slipping or slowing down.  I believe Floyd Mayweather will win a lop sided unanimous decision against the tuff Argentine.

Mayweather will use quickness to keep Maidana off him early and then hand speed to scare Maidana from punching. The fight will be competitive early, but will be Mayweather’s past the fourth round, I expect a vintage performance from Floyd Mayweather

Mayweather versus Maidana well, we are looking at possibly another PPV  glorified sparring session here folks. I really don’t think that Maidana will look good. Beating Broner does not mean you can compete with Floyd Mayweather. Floyd simply does everything better, and he can punch at 147. Maidana has not responded well to 147 power punching, even Broner had him hurt.  UD or TKO Mayweather

Maidana is not a fighter I tend to pick against lightly but out of all the fights I have picked for or against him I feel the most confident in this one. Mayweather is just too smart to allow himself to 1. get pushed into a slug fest and 2. not realize Maidana when he gets frustrated will make the fight rough and dirty. Expect Mayweather to outbox Chino consistently but we will see moments when Chino gets on the inside and provide some excitement. I have Mayweather winning by a large margin Unanimous Decision and I expect Maidana to win only two rounds; one early in the fight and one in the later rounds.