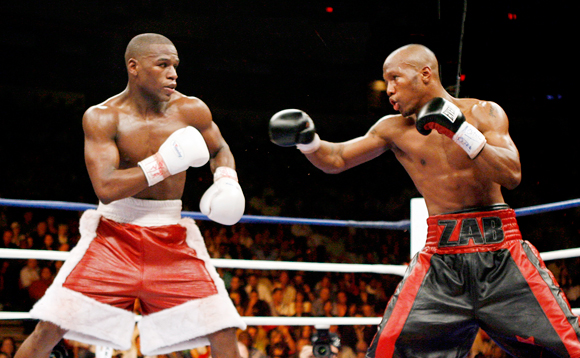 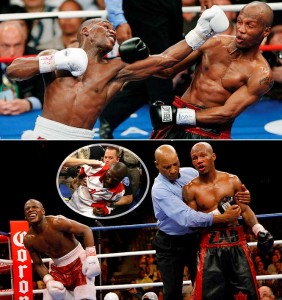 For the past week, there has been a rumor that former two-division world champion Zab Judah (42-9, 29 KOs) was purported to have knocked out undefeated pound-for-pound king Floyd Mayweather Jr. (47-0, 26 KOs) in a sparring session.

Mayweather hired the 37-year old southpaw to help him prepare for another southpaw in Manny Pacquiao (57-5-2, 38 KOs) on 2 May at the MGM Grand in Las Vegas.

After I had done some research, it has been discovered that the rumor was manufactured. The story was based on another rumor that Mayweather was knocked out in a sparring session close to two years ago when he was preparing to fight Saul ‘Canelo’ Alvarez. The Worldwide Sport of Boxing, which according to Facebook, is a sports promoter based in London, England, broke the rumor on September 8, 2013.

“Floyd Mayweather was ‘knocked down’ during a sparring session on Thursday night. “Mayweather got hit with a good shot, a left hook to the body, and he went down.To my knowledge, Money has never gone down ever, not in sparring, or in the ring.

David Mayo, a sports reporter with MLive based in Detroit, Michigan, went to Mayweather’s camp to figure out what the real story was. When he asked unidentified sources working in the Mayweather camp about the supposed knockdown, he was met with funny looks because the report turned out to be false.

Mayo added, “They looked at me like I had three heads. They were legitimately baffled.

Then, on March 26, 2015, a report was released by Allsports.com, stating one onlooker witnessed Zab hit Mayweather with a hard left hook to the body and Floyd went down.

According to Allsports.com, “Zab hit Mayweather with a good shot, a left hook to the body, and he went down. To my knowledge, Money has never gone down ever, not in sparring, or in the ring.” As you can see, the quotes are just about identical. This is a complete fabrication of another rumor that was false.

Zab Judah himself addressed the rumors on Twitter on Tuesday stating, “That’s Not True it never happen stop it.”

The only thing we can confirm is from young prospect Cody Crowley (3-0, 2 KOs) who revealed in an exclusive interview with Dontae’s Boxing Nation that Mayweather did knock someone out in the second round in sparring, but the name of the fighter was never revealed.