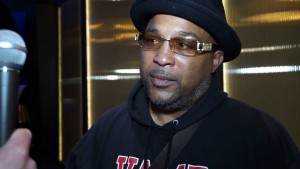 Renowned trainer Buddy McGirt recently offered up his thoughts on the thrilling three-round dust-up between Saul ‘Canelo’ Alvarez(45-1-1, 32KO’s) and James Kirkland(32-2, 28KO’s) in Houston, Texas over the weekend to Esnewsreporting.com.

After the somewhat anticlimactic mega-show that was Floyd Mayweather Jr vs Manny Pacquiao the week before, a slimmed down audience were hoping for something explosive to make up for all of the over-expectations that were dashed with a display of technical brilliance on Mayweather’s part.

Canelo-Kirkland was the fight of the year so far. Kirkland, as many expected he would, charged forward to put Canelo under pressure immediately, backing him up against the ropes and letting off his punches. The Mexican starlet set down his template for the evening by staying composed, slipping, blocking and rolling with the volume coming his way before launching his own sickening shots as soon as a gap presented itself. He pushed Kirkland back and managed to reverse the tide by penning the native Texan in just as he had been a few moments before.

Canelo scored the first knockdown with a very deliberate sequence of punches. With Kirkland against the ropes, he tapped a right hook to the chest to bring the hands up before slamming in a left hook to the body. He then anticipated Kirkland’s trajectory, and so launched a perfectly timed straight right hand off to the side just as Kirkland’s pained face entered that area, crumpling him to the canvas. The pained expression turned to bewilderment, but he got up. Nobody would have blamed the referee for stopping the fight during the bombardment of clean hooks that landed afterwards, but the sound of the bell took the decision out of his hands. 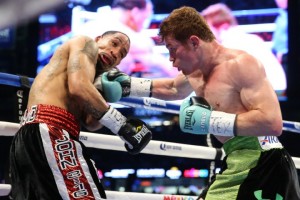 The second round contained similar action just less spectacular, but the third was something special. Canelo spent the first half of the round against the ropes. Kirkland had recovered well from his early setback and was pouring on the punches and looked to be gaining the kind of momentum that usually indicates trouble for his foes. Canelo was having none of it. With two hard body shots, he drove Kirkland back, and they shuffled across to the opposite side of the ring. He landed two swinging shots to the head, but the brave Kirkland kept pushing on, venturing forward with a searching lead left hand from the southpaw stance. Only, he landed chin first on the tip of a sublime right uppercut that sent him to his knees. He rose again with glassy eyes.

The final blow was awesome. Canelo steamed in as the action recommenced, and Kirkland conceded ground, backing up against the ropes. Canelo jabbed to the body, again making the gloves go where he wanted, and slammed home a right hook to a newly exposed jaw that sent Kirkland spiralling to the canvas, clearly separated from his senses. It took him a good while to come back to earth.

With that Canelo cemented his spot as the next star in boxing for everyone who doesn’t already hold him in that regard. Looking back on it, Buddy McGirt says that fight was just what the doctor ordered and gave Kirkland his props for the way he conducted himself throughout.

“That was the fight boxing fans needed. Great crowd, great atmosphere, a heck of a fight for three rounds. Gotta gives Kirkland credit; he came into the lion’s den, and he went out there man. He didn’t try to box or play in cautious; he went straight for the gusto. Unfortunately, he lost but you know, I think that will only give him another opportunity with the performance he put on last night.”

And as good as Canelo looked in what was probably a career best performance, McGirt felt that Kirkland’s brazenness played right into his hands.

“He had the perfect guy to fight who was gonna come to him, not a guy that was gonna box. So you know they say styles make fights, and if he fights guys like that I think he’ll always be victorious. It’s just the boxers that give him trouble.”

Canelo is 2-1 against the last three boxers he faced. He got shut out by Floyd Mayweather in 2013 but earned two highly disputed decision wins against Austin Trout and Erislandy Lara on either side of that loss. Kirkland was certainly a better fit for him, but he still needed to remain composed when the fire was reigning down on him and not capitulate as so many others have. This was a landmark moment for him. He was so measured and calm when defending, and so destructive and accurate going forward that it is hard to imagine a super fight with WBC middleweight champion Miguel Cotto will bother him much. On the strength of this performance, not many people will pick against him if that fight comes together.