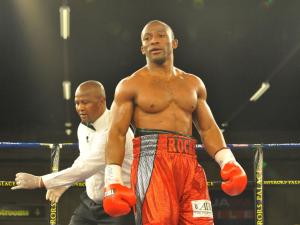 Thabiso “The Rock” Mchunu the South African Cruiserweight now improves to (17-1 KO’s 11) with a dominant win over Garrett Wilson. Mchunu delivered a brilliant boxing exhibition and displayed why he is the number two-ranked cruiserweight in the world.

Mchunu dominated Wilson by staggering him in the second round, and dictating the pace for the majority of the fight. Mchunu found it quite easy to penetrate through Wilson’s defense with straight lefts and uppercuts upstairs, and hooks to the body. Mchunu’s countering abilities also made Wilson hesitant, which negated his tendencies of rough housing and being able to make his opponents feel uncomfortable. Wilson was unable to break through the slick defense of Mchunu, which lead to a near shutout. The official scorecards read 96-93, 99-90, and 98-91 all in favor of Mchunu by unanimous decision.

Despite the lop-sided scoring much credit must be given to Wilson. He definitely came to win. Wilson pressed the action throughout the entire bout, and did not back down even though he was hopelessly behind in the scorecards. In the last two rounds, Wilson was finally able to land a couple of clean punches and have some success. Mchunu was not in serious danger, but was clearly uncomfortable. This lead Mchunu to excessively clinch in final round, and the referee was forced to deduct a point. When the fight ended the crowd gave cheers to Wilson’s determination and his fan friendly style.

Wilson’s loss does not advance him in the rankings, but his fan friendly style will surely keep him on the radar of network television. As for Mchunu, his dominant victory will allow him to keep climbing boxing’s ladder. His level of skill and talent seem to be on a par with any of the top fighters in his division. People can expect great things from Mchunu in the immediate future.