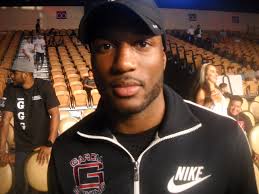 Life is often what you make it and we all hope that when we get close to the end, we find solace and are not filled with regrets. In the latest episode of NPR’s “This American Life,” they challenged the concept of regret most notably with a man who had a swastika tattooed on his arm and spent thirty years in prison for heroin addiction. He regretted nearly everything from the tattoo to the fact he never really knew his family even though they stood by him. The most telling moment was hearing the voice of a man who felt like he lived the wrong life and confused what will happen to him with so little to show for himself both spiritually and financially.

Enter Darwin Price (5-0, 3 KOs), one of the latest Al Haymon signee’s, a man who has had every chance to fail, but somehow gets up even better every time adversity knocks him down. Price was a decorated amateur boxer, but in many ways took a backseat to his cousin, Preston Freeman, a man whom any who ever saw him in person knew he was special. Preston was the type of fighter who would work on subtle things to try on guys in sparring and catch the tough guys, the gym bullies and leave them looking discombobulated and flustered. “It was a shock when I heard the news,” Price reflected on that sad March day when he heard the news of his cousin’s death when asked upon how things have changed since that time.

Freeman was murdered in front of a St. Louis nightclub the week of his fight he had scheduled in Redwood City, CA. Freeman, as the story was told to me, was going home to get his mind right and be around loved ones, but ran into a wrong place wrong time crime, that may have taken one of the greats of the sport in a Len Bias type American sports tragedy. This is no strange occurrence as Missouri has sadly spent the past few months at the center of national attention for the level of violence, for example you might have heard of a town called Ferguson?

Even recently at the opening of Kevin Cunningham’s Knockouts Bar & Grill, in Florissant, Mo. a bouncer was murdered in cold blood. As my friend from the the region explains, it is an area of disparity and that the racial divide is so tense along with lack of hope in many instances violence occurs way to often. It is a mindset and cycle that is sad and yet so complicated to fix that it seems tenuis to think of.

On top of all of this Price was a father at seventeen, went to college for four years and found himself in a hopeless position in a dystopic America that was not offering many jobs let alone, good jobs. So Price began his foray in boxing in my area of all places, the greater Bay Area in Salinas, CA with the Garcia’s, Max, Kathy, and son Sam, in which he was with the camp until last January of this past year.

Price describes the experience as an overall positive one as he was able to spar with Marcos Maidana prior to the Adrien Broner fight, but that things were not working for him. Price said that he wished nothing, but the best for his prior camp, but felt a bit isolated and was in need of a change. Price moved back to St. Louis early this year and planned to train with Kevin Cunningham, but life threw him another curve ball as Price began working as a security guard and was unable to train with Cunningham at the aforementioned times need.

“I never gave up, I constantly stayed in shape, I went back to my old gym [in St. Louis] and would work every day. I was reaching out to everyone I could think of and then I found Ronnie Shields,” Price explained. Price went to Houston, Texas to see how Shield’s camp was and not long after relocated there. “It’s rare to find someone in this game, that is loyal, he said he would take care of me and he has. It really means a lot,” Price said of his new trainer.

It is Shields who introduced Price to Al Haymon who signed the prospect. Price reflected on how it is being in the gym seeing the Charlo brothers on a daily basis and just how he enjoys the atmosphere. Recently Price made his return to the ring in Studio City, CA knocking out Shawn Wate in the first round, but Price has bigger goals for 2015.

“I have no time to waste, I want to get my record to 13-0 by the end of 2015.” Price hopes to fight at a blistering pace in the new year. Looking at the upcoming schedule of dates it appears the next date Price could appear on is January 17th in Las Vegas, NV on the undercard of Bermane Stiverne vs. Deontay Wilder. Price though as of right now doesn’t know when he will return other than he wants to return as soon as possible.

Price is a slick, boxer puncher who when I first saw him reminded me of a gazelle with the punch of a mule. Price is a freak athlete. I would say any sport he put his mind to he would of been a pro athlete. He is just that much of physical anomaly. Price moves in the ring so quickly at times I would look down to take a sip of coffee look up and he had moved to the other side of the ring. There is fast and then there is Darwin Price fast. Maybe I am just a softy for the people who came up in my area in the local scene, but I feel like Darwin Price is a fighter that is worth a damn and that you should at least, be somewhat familiar with his name in the coming year.