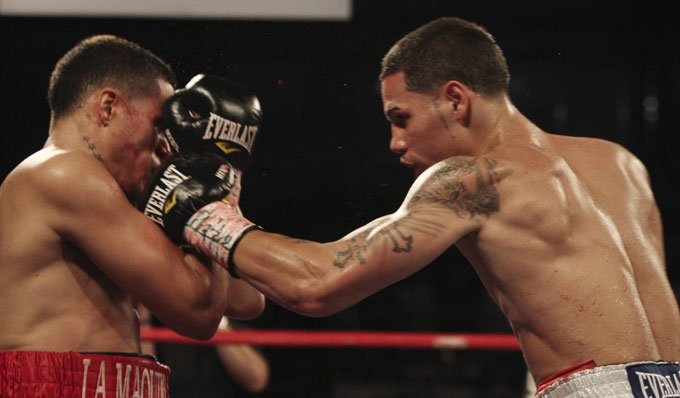 The Miguel Cotto-Austin Trout undercard will feature some of the best young talent boxing has to offer. Amongst the fighters on display will be one of Golden Boy’s top prospects, Michael “The Artist” Perez. A Jersey-boy from the rough streets of Newark, Perez will be making yet another appearance on a big time card.

It will cap off a pretty active year for Perez with this being his 4th fight. He enters the December 1st fight coming off a win against Fidel Maldonado Jr., but it wasn’t an easy night of work. He was in control for most of the bout but in the 10th Maldonado was able to drop “The Artist”. “I feel like I had a real good performance. A lot of people didn’t know what happened in that fight. I hurt my hands, both my hands in the 4th round. So that’s why a lot of people were like why’d he back off? That’s why I had to box, that’s why I had to move around. To me I won majority of the rounds. The 1st judge gave it 97-92 and I feel that was the score. The other 2 were close. The knockdown at the end of the fight, it happens to anybody. At the end of the day that’s part of the sport. I got back up and I finished the fight. At the end of the day I’m still here and moving forward,” Perez stated.

Getting the victory over a solid fighter like Maldonado was exactly what Perez needed to remain in the talks of top prospects out there. It gave him back to back victories to get the ball rolling for him again after a disappointment in his initial outing of the year. He took on Omar Figueroa in January and it was a failure, he was dominated until the 6th round technical decision that saw him losing 60-54, 59-55 and a closer score of 58-56. Perez was game; though he couldn’t get it done that night he says it was a valuable experience, “I learned a lot in the Figueroa fight. It was like taking 2 steps back but at the end of the day I’m glad it happened to me early in my career. I’m still learning in this career, I’m happy it happened to me early. I learned from it, took it as a positive. It’s like a booster for me now. I’m moving forward and learning,” Perez proclaimed.

Many fighters have needed that exact learning experience that Perez had and went on to be champions. What you do after a fight like that is what really matters. But you better make sure your next opportunities are drastically different. “I’m real grateful, I’m just here, and I’m humble. Learning from every fight; I’m still young, I’m still growing. I’m just trying to go out there and show the world who Michael Perez is,” Perez exclaimed.

What better chance to show the world who you are then on a Cotto-Trout under-card  Cotto is one of the more popular fighters in the world and Trout is a world champion, that’s a big stage to be on. With the back drop being the Mecca of boxing Madison Square Garden, there’s even more focus on the event. For a young fighter there might be some nervousness on a major card like this but this isn’t Perez’s first go round. “I been on a few big cards already; Mayweather and Marquez in Vegas. It’s just something that’s part of the sport and something I’ve gotten more used to. I’m real thankful and real blessed that I’m fighting on that card. I’m real anxious to get up in there and show the world. They had a fight for me, Darley Perez he’s ranked #5 in the world, but he didn’t want to take the fight. We don’t know who the opponent is. Hopefully we can find an opponent soon,” Perez added.

Assuming a victory on Dec. 1st, the Lightweight division will have a viable contender on their hands. He will need a fight or two against top ranked guys but Michael feels he will be ready to take a crack at a title in 2013. “I’m shooting for a world title. That’s what everybody’s dream is. God willing it comes through and we’re taking it home. I’m working real hard, we are still learning, I’m still adapting to this pro level. God willing I get to that level that I can be known as one of the greats and just keep pushing forward,” Perez said.