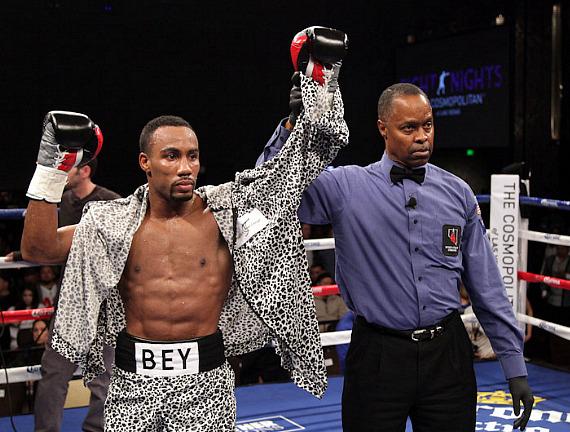 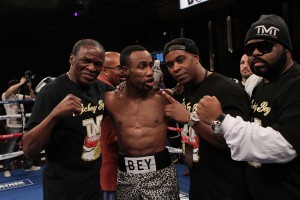 Standing under the bright, hot sun in the parking lot of the Mayweather Boxing Club in Las Vegas, lightweight titleholder Mickey Bey broke down the Mayweather-Pacquiao fight to Dontae’s Boxing Nation on YouTube.

Bey (21-1-1, 10 KO) is signed to Mayweather Promotions and trains out of the Mayweather gym. He is coached by Floyd Mayweather Sr. and won the IBF lightweight strap on the undercard of Mayweather’s last fight against Marcos Maidana.

“Floyd gon’ beat him easy,” Bey said regarding the much-awaited mega-fight. “The only thing; Manny gon’ bring the fight, because Manny don’t know how to not bring it so he gon’ try to but, Manny just not a good thinker,” explained the Mayweather fighter.

Bey is considered the best among the Mayweather stable and is the only champion other than Floyd, signed with Mayweather Promotions. To Bey, who was discovered as an amateur by Mayweather, Pacquiao’s biggest flaw as a fighter is reacting instead of thinking.

“He got good physical assets like speed, power, but he don’t really know how to think in there, and that’s his flaw. He just react, he a fighter that react,” Bey said.

Usually after his fights, Mayweather is accredited with reacting and making the right adjustments to win. Bey feels Pacquiao is a step behind Mayweather.

“Floyd is thinking, so he gon’ know everything that Manny is doing,” Bey said. “He [Mayweather] gon’ be thinking it, and he [Pacquiao] just gon’ be reacting so, it’s gon’ be checkers versus chess,”  Bey concluded.

On whether or not Mayweather was ever perceived Pacquiao’s as a threat, Bey said never.

“He never saw him as a threat, I know that for a fact. I’m talking about even before they was talking about them fighting, I never even heard him [Mayweather] bring Pacquiao up.”

Naturally, when fight fans heard that the undercard would feature fight put on by Top Rank and another through Mayweather Promotions, Bey’s was the first name fans assumed would secure an undercard slot. Whether or not that is true remains to be seen; however Bey remains focused and happy for his mentor.