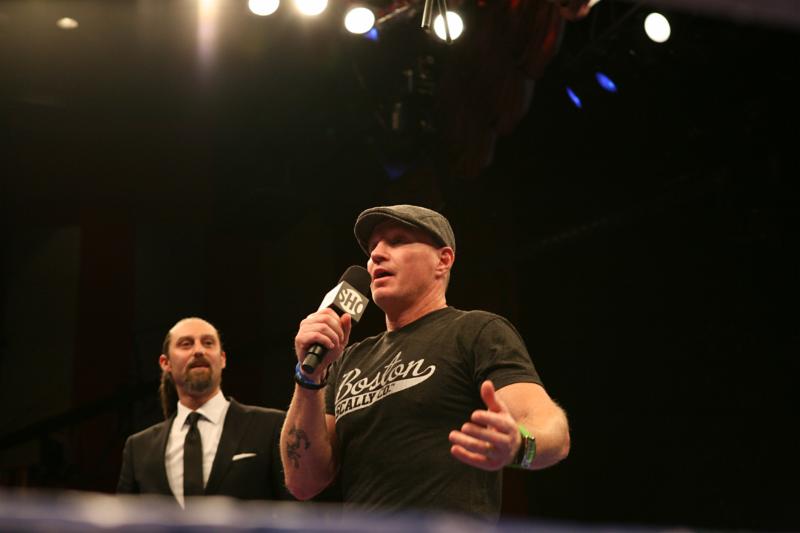 Promoter Lou DiBella, who promoted Ward (38-13, 27 KOs) during the latter part of his career, including the epic Arturo Gatti-Ward trilogy, gave Ward a beautiful watch as a birthday present during a private meet-and-greet.

“We had a terrific crowd at the SHOWTIME Boxing event on Saturday night, and it was made more special by the celebration of Micky Ward’s 49th birthday,” said Lou DiBella. “DiBella Entertainment was and always will be Micky’s promoter. It was a great pleasure to celebrate Micky’s birthday with him.”

Three lucky fans were selected as winners of a “Micky Ward Birthday Contest.” Each winner and one guest apiece sat ringside with Ward during one of three televised fights and were able to take photos with him and get his autograph.

“Irish” Micky Ward cuts his 49th birthday cake
with a video of him vs. Arturo Gatti playing in background

(L-R) – Ring announcer David Diamante led fans at Fox Theater with a rousing rendition of “Happy Birthday” to Micky Ward, who is shown here thanking everybody.

(L-R) – Micky Ward and Peter Manfredo, Jr., who served as Ward’s chief sparring partner for his first fight (and win) against Arturo Gatti.