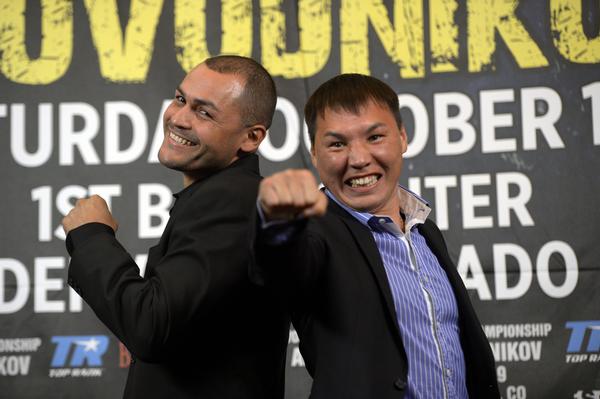 Denver’s very own homegrown world champion “Mile High” MIKE ALVARADO  and  No. 1 contender the “Siberian Rocky” RUSLAN PROVODNIKOV of Russian both coming off nationally-televised Fight of the Year performances — will face each other for the last time outside the ring at the Official Weigh-In for their world championship rumble, Today!  Friday, October 18, at Diego’s Mexican Food & Cantina on the 16th Street Mall (1600 Champa St., Denver, Colo. 80202.)  Media can report at 2:00 p.m.  The fighters will step on the scale at 3:00 p.m. MT.

The weigh-in, open to the public, will be streamed live via www.toprank.tv.

Promoted by Top Rank® and Banner Promotions, in association with Tecate, Alvarado and Provodnikov enter this world title tilt fresh from Fight of the Year performances that took place in March, just two weeks apart from each other, and were televised on HBO.  They boast a combined record of 56-3 (38 KOs) — a winning percentage of 95% and a victory by knockout ratio of 68%.