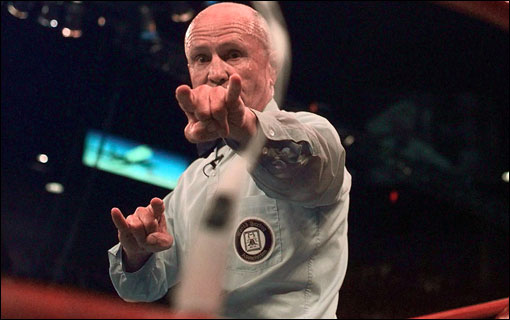 LAS VEGAS, NEV. (July 11, 2013) — Former referee Mills Lane, who officiated many of the most famous matches in boxing history, has confirmed he will attend the

Induction Ceremony and Dinner of the Nevada Boxing Hall of Fame Saturday, August 10, at the Monte Carlo Las Vegas Resort and Casino.  Lane is one of 19 honorees who will be inducted into the historic inaugural class of the NVBHOF.

Remaining tickets for the Inaugural NVBHOF Induction Dinner are available at the Nevada Boxing Hall of Fame website:  www.nvbhof.com.

Lane’s signature line, “Let’s Get It On” at the end of referee’s instructions to the fighters and their chief seconds, signaled it was fight time to fighters and fans alike.  Lane refereed World Championship bouts throughout the 1970’s, ’80’s and ’90’s. His fellow inductee, former Nevada State Athletic Commission Executive Director Marc Ratner said, “Whenever we assigned Mills Lane, we never had a second thought. A consummate professional, and a great referee, Mills is an even better person”.

Upon his retirement as a referee, Lane entered the world of promotion, founding “Let’s Get It On” Promotions. He then furthered his brand, becoming a TV reality star
in the show “Judge Mills Lane”. Unfortunately, he suffered a debilitating stroke in 2002, and has only rarely been seen in public since. However, Lane is making it a point to attend his induction into the NVBHOF.

Lane’s son Terry, who along with brother Tommy, now run “Let’s Get It On Promotions” said, “My dad feels honored to be inducted into the Nevada Boxing Hall of Fame. It is even more special that he is part of the inaugural class. From fighting to refereeing, the vast majority of my Dad’s career in boxing took place in our great state. My Dad lives in Nevada. It is where he made his home, and boxing brought him here.”

Lane boxed at the college level for the University of Nevada in Reno. He served as Washoe County District Attorney and lives in Reno. He goes into the Hall in the
“Officials” category along with fellow Nevadan Joe Cortez

Lane was recently inducted into the International Boxing Hall of Fame at Canastota.

The Nevada Boxing Hall of Fame is an IRS 501 (c) (3) tax-exempt organization.  Ticket sales to its events, purchases from, and donations to the NVBHOF are tax-deductible.  Donations can be made by visiting the NVBHOF website: www.nvbhof.com. You can “like” NVBHOF on Facebook (facebook.com/nvbhof) and follow it on Twitter (@nvbhof).  For contest entries for dinner/ceremony tickets go to www.nvbhof.com/contest.