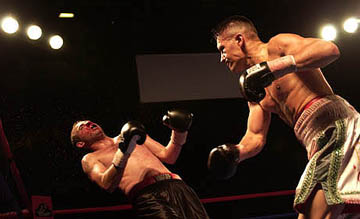 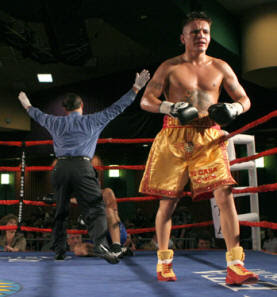 “I am expecting for him to move and pretty much run, run from the pressure I am going to put on him,” Hector Munoz  said in an exclusive interview with ThaBoxingVoice.com in regards to his upcoming bout with Dusty Hernendez-Harrison on September 27th. “I don’t know nothing else, but pressure and brawl,” Munoz explained. For Munoz, a six week training camp is a change for a fighter who has made a career out of taking fights on short notice against premium opposition most notably  Jermall Charlo last April.

“I watched a little bit of tape, when he fought my boy Josh Torres, my stablemate. Josh could of beat him, he just didn’t apply the pressure he was suppose to.” Munoz added that a pressure fight is his type of fight and his intentions will be to dictate the rule of engagement. Hernendez-Harrison, an unbeaten Washington D.C. prospect measures in at six feet tall meaning Munoz will have to use his pressure to make the fight because  Hernendez-Harrison would be comfortable at distance using his jab. “He is a tall kid, but I am going to use his youth against him,” Munoz explained.

“I just love doing this sport. It’s more like a hobby to me, I make a decent living off of it getting short notice calls, free Mayweather tickets ‘cause they know I come to fight regardless. I just love to fight,” Munoz explained when questioned about what this win would mean to him. “You’ll see non stop pressure, not just walking pressure, I am talking about constant pressure.” Munoz expects a solid performance due to actually getting to put in a full training camp.

Munoz is no stranger to top level training as he has been brought into two different Devon Alexander camps as well as Fernando Vargas, Mike Alvarado and Adrien Broner. “There are just so many camps that I could name, but I never take advantage of the situation, but this time I have six weeks to get ready for the fight.”

A year ago, Munoz surprised Hector Camacho Jr., who called him two weeks out from the fight without knowing Munoz was in camp with Danny Garcia prepping him for the Lucas Matthysse fight. “I surprised him and got a unanimous decision at a heavy, heavy weight I shouldn’t even be fighting at [super middleweight].”

“He is a really good boxer, I am not taking nothing away from him, but I just have experience and the six weeks is like a bonus to me,” Munoz said.  Munoz explained quite simply that he is coming in for the victory and eager for another big fight after this opportunity. One thing to note is that Munoz’ phone  continues to ring even though he has a fight signed and one of the fighters calling looking for a fight is notable welterweight Josesito Lopez.

Munoz also explained that he could be more active if his weight was more in check, but Munoz simply explained, “I enjoy my food.” Munoz, wouldn’t state the weight he was currently at, but did say that he is wearing a plastic suit right now to shed some of the pounds and also that “We’ll be good at the weigh in,” when pressed about his current weight.

Dusty Hernendez-Harrison faces Hector Munoz September 27th at DAR Constitution Hall, Washington, DC. Tickets go on sale Thursday, August 28, and will be available through Ticketmaster. Ticket prices are $150 Ringside, $75, $50 and $25. For more information please visit www.ticketmaster.com or call All In Entertainment at (202)331-3902.