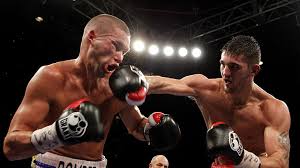 Nathan Cleverly says Tony Bellew cannot handle his all-round ability and that will be the key to victory when they meet at the sold-out Echo Arena in Liverpool on Saturday night, live on Sky Sports Box Office.

Cleverly and Bellew both feature in the first half of Sky Sports’ fly-on-the-wall look at the training camps of both men tonight at 10.30pm on Sky Sports 1 in part one of Behind The Ropes, and the Welshman told the show that Bellew’s ‘apparent’ punching power is overrated.

“A lot of people have him as the favourite because he’s the naturally bigger guy,” said Cleverly. “He is heavy handed, apparently, so they think that is too much of a jump for me and it is a big jump. I’m up against it but I am confident. I know my own body, I know what I can do. Mentally and physically, I know my limits and I know that I can beat this guy at Cruiserweight. I feel comfortable, strong, sharp and fit. I’ll beat this guy.

Cleverly and Bellew is a rivalry that began in May 2011 when they clashed at a press conference and has festered ever since, taking in their first fight in October 2011 and then resurfacing when they both moved to Cruiserweight under the stewardship of Eddie Hearn.

“We just clash,” said Cleverly. “At the end of the day, I am a winner and in the first press conference I was World champion and he came in with this attitude. I was sat at the table and he kind of looked at me and said something and he got under my skin straight away.

“More importantly though, we both delivered on the night. I delivered a good solid performance and Tony Bellew gave it everything. He threw the kitchen sink at me that night, that was his big chance and it made for an excellent fight.

“I’m World champion, let’s defend my title in his hometown’. That’s what a proper champion does and that is what I did.”