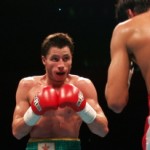 Nugaev (27-6-1, 17 KOs), who’s rated IBF #5, WBC #3 and WBA #7, is currently riding a 5-fight knockout streak since arriving from Russian in 2013.  Shafikov (33-1-1, 18 KOs), is coming off a 12-round unanimous loss to current IBF champion, Miguel Vasquez (33-3, 13 KOs).  Both fighters have an aggressive style which Gary Shaw believes will make for an exciting night of boxing.  The winner will position himself as the mandatory challenger to fight for the IBF title.

“This is going to be one hell of a fight for the fans,” said Gary Shaw. “Nugaev is a tremendous puncher with a great chin and he loves to bring the fight to his opponent.  Shafikov is similar as he also likes to come forward and throw big shots. Both fighters have a lot to gain with a victory.  With the winner becoming the mandatory to fight for the IBF title, I see nothing but fireworks in this fight, and I feel Nugaev will come out on top.”

“I have to commend ESPN for showcasing a real fight, a fight that the fans are guaranteed to enjoy.  There have been a lot of mismatches in boxing of late and fight fans deserve to see more hard-hitting competitive fights, especially in a main event attraction.  In Nugaev vs. Shafikov, you have two fighters who are putting everything on the line to get a world title opportunity.  This Friday a “WAR” will be shown on ESPN “Friday Night Fights” so everyone should be tuning in.  This fight has the potential to be Fight of the Year.”