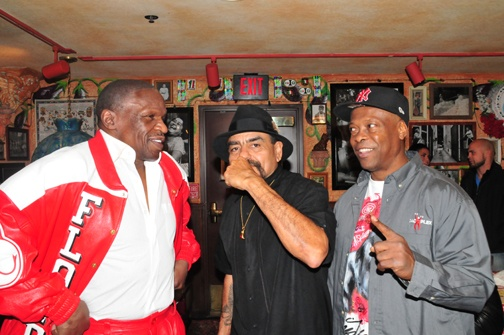 LAS VEGAS, NEVADA – (January 17, 2014) With just four days of official taping under their belt, NUVO TV’s new boxing reality show Knockout has proven to be an overwhelming mainstream success.  Over the past 10 years boxing has rarely been mentioned in the mainstream media unless the news involved Floyd Mayweather Jr, Oscar De La Hoya or Manny Pacquiao.

Sites like TMZ and World Star Hip Hop have picked up footage from the taping of the show which has already generated over a million views.

The heat on the set has been raised ten fold with the addition of notorious three time world champion Ricardo “El Matador” Mayorga.  The flamboyant Nicaraguan has already gotten the attention of his competitors on the show who would love nothing more than to knock the arrogant former champion out.

With the tension rising between fierce rivals Floyd Mayweather Sr. and Ruben Guerrero, and third trainer Yoel Judah trying not to get caught in the crossfire, fans are clamoring to see how their Real Life Grudge Match culminates on May 17th when the official fight card is broadcast live only on NUVO TV.

Under the watchful eye of premier director Emilio Ferrari and executive producer and entrepreneur Steven Marcano (founder of My Lil Star Baby Products Inc.), NUVO TV’s foray into the boxing world undoubtedly will be a smash hit.