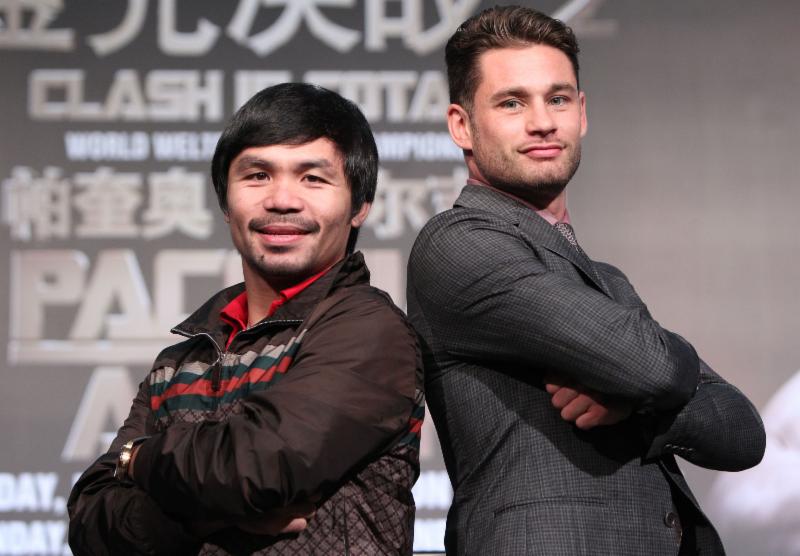 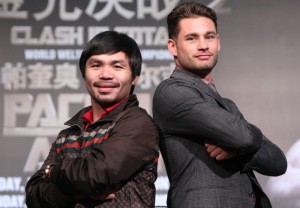 Boxing’s only eight-division world champion and Fighter of the Decade Congressman MANNY “Pacman” PACQUIAO will defend his World Boxing Organization (WBO) welterweight title against New York’s undefeated WBO junior welterweight champion CHRIS ALGIERI, who has a Bachelor of Science degree in Health Care Management, a Masters Degree in Clinical Nutrition and a Ph.D. in Upsets Inside The Ring. Promoted by Top Rank® and Sands China Ltd., in association with MP Promotions, Joe DeGuardia’s Star Boxing, Banner Promotions and Tecate,the Pacquiao vs. Algieri world welterweight championship event will take place Saturday, November 22, at The Venetian® Macao’s Cotai Arena. It will be produced and distributed live by HBO Pay-Per-View beginning at
9:00 p.m. ET / 6:00 p.m. PT.

Pacquiao and Algieri, announced their world championship fight during a two-week 27,273-mile international media tour, which kicked off August 25 with a press conference at The Venetian Macao. The tour will include stops in Shanghai, San Francisco, Las Vegas, Los Angeles and New York.

“Chris Algieri fought an exceptional fight in June to win the world title from Ruslan Provodnikov,” said Pacquiao. “I am impressed and intrigued by his scientific approach to training and boxing. He may be the smartest and the fittest athlete I have ever faced and that makes him the most dangerous. I worked hard to reclaim my welterweight title and I will work harder to make sure I keep it on November 22. As always, I dedicate this fight to my fellow Filipinos around the world and to bring glory to the Philippines. ”

“It is a real honor to fight a future Hall of Famer like Manny Pacquiao and I am looking forward to being introduced to a whole new market and fan base in the Far East,” said Algieri “My last fight against Ruslan Provodnikov got the world’s attention, now I am going to show what I can really do. I have the utmost respect for Manny and his great team, but make no mistake — I am here to win and I have nothing on my mind but beating a legend.”

“I underestimated Algieri when he faced Ruslan Provodnikov in June but I won’t make that mistake again,” said Hall of Fame trainer Freddie Roach. “I hope he understands that this is a fight and not a marathon. Algieri is going to face the best of Manny Pacquiao because Manny is going to have his toughest training camp ever. I am looking forward to a great fight and Manny’s finest hour on November 22.”

“Over the past 14 years I have trained and watched Chris become a Master of the Art of Boxing. His hard work ethic, discipline and dedication are second to none,” said Algieri’s trainer, Tim Lane. “Chris has been in the gym after only one week off from his last bout with New York trainers Keith Trimble, Dr. Mike Camp and Tony Ricci who have kept him in great shape through the years and continue to help him get stronger and faster between and during all camps. Training camp will officially start in late September in New York and finish in Las Vegas before leaving for China. Let it be known, there is a New ERA in the world of boxing and on November 22. Chris Algieri will once again Shock the World and become the New WBO Welterweight Champion!”

“The battle between the two world champions will be a fantastic fight. Manny’s non-stop attack style will be challenged by Algieri’s laser-like punching,” said Hall of Fame promoter Bob Arum.

“It has been a great year. In February we had Chris at The Paramount on ESPN, in June on HBO winning the World Championship at Barclays Center in dramatic fashion against the feared Ruslan Prodvodnikov. Now we are excited to announce that he will be at The Venetian Macao against legendary Manny Pacquiao on HBO Pay-Per-View. It has been an unprecedented meteoric rise that will continue on November 22. I look forward to this intriguing and ‘landscape-changing’ fight,” said Algieri’s promoter, Joe DeGuardia, President and Founder of Star Boxing.

“Sands China is thrilled to be bringing Manny back to Macao again to fight at the Cotai Arena this November,” said Edward Tracy, President and Chief Executive Officer of Sands China Ltd. “Since Manny’s sold-out Venetian Macao debut in November 2013, we’ve worked continuously with Bob Arum and Top Rank to host three more successful boxing cards at the Cotai Arena and two live screening events of US cards; and further, announced our partnership on the mainland China television program ‘Fist Power – Fight to Win.’ We’re happy to see these events helping promote the growth of boxing in the region while raising the profile of Macao as a world centre of tourism and leisure.”

“Against all odds, Manny Pacquiao has produced a brilliant, Hall of Fame career. He’s accepted challenges around the globe and established new frontiers, including fighting on pay-per-view from Macao,” said Mark Taffet of HBO Pay-Per-View. “Now another young, talented and unassuming prizefighter named Chris Algieri will try to defy the odds and fulfill his dreams by challenging Pacquiao for his welterweight crown. In Chris Algieri, fight fans see a great American story with added intrigue based on the heart and courage he displayed in his recent victory over Ruslan Provodnikov.”

Pacquiao (56-5-2, 38 KOs), the lone congressional representative from the Sarangani province in the Philippines (he was reelected to a second term, running unopposed last year), is the only fighter to win eight world titles in as many different weight divisions. A three-time Fighter of the Year and the Boxing Writers Association of America’s “Fighter of the Decade,” Pacquiao made his Cotai Arena debut last November 24, pasting former world champion Brandon Rios with a unanimous decision beatdown. Pacquiao’s resumé features victories over present and future Hall of Famers, including Oscar De La Hoya, Ricky Hatton, Marco Antonio Barrera, Erik Morales, Miguel Cotto, Shane Mosley and Juan Manuel Márquez. From 2008 to 2010, five of his seven victories were world title victories in five different weight classes, from 130 to 154 pounds. No active boxer has sold more live tickets in the U.S. than Pacquiao, who is also credited with nearly 13 million domestic pay-per-view buys. He returns to the ring after avenging his controversial 2012 split decision loss to undefeated two-division world champion Timothy Bradley, Jr. on April 12. Pacquiao won a scintillating unanimous decision to regain the WBO welterweight crown back from Bradley. .

Algieri (20-0, 8 KOs), from Huntington, NY on Long Island, has become boxing’s No. 1 story, as well as being hailed as the 21st century real-life Rocky. Over the last 22 months Algieri, a former kickboxing champion, has elevated himself from a prospect to a world-class contender to a world champion. After accumulating significant victories over top prospect Jose Alejo, former USBA champion Mike Arnaoutis, and highly-rated contender Emmanuel Taylor, Algieri, stepped up in his HBO debut and challenged WBO junior welterweight champion “The Siberian Rocky” Ruslan Provodnikov on June 14 Despite suffering two knockdowns in the first round which closed his swollen right eye, Algieri who entered the fight as a 5-1 underdog, eschewed the natural instinct to panic and resolutely stuck to his game plan, expertly using his jab and supreme athletic ability to pick apart the defending champion to claim a split decision victory and the world title. The live, first-time airing of the fight averaged over 1.1 million viewers placing among the five most-viewed fights on cable this year. In what could be a first for any professional boxer, Algieri used his purse from the Provodnikov bout to pay off his student loans. He is as much a scholar as he is a brawler. Algieri graduated from Stony Brook University with Honors in 2007 with a Bachelor of Science degree in Health Care Management and then went on to receive his Master’s degree in Clinical Nutrition from the New York Institute of Technology. He aspires to attend medical school.

Advance tickets to Pacquiao vs. Algieri are available for purchase August 26-28 for Sands Rewards Club and Cotai Ring Club members. This exclusive pre-sale offer is available only at the Cotai Arena box office, and is not available online or via phone. For more details, visit www.venetianmacao.com/macau-entertainment/clash-in-cotai-ii.html.