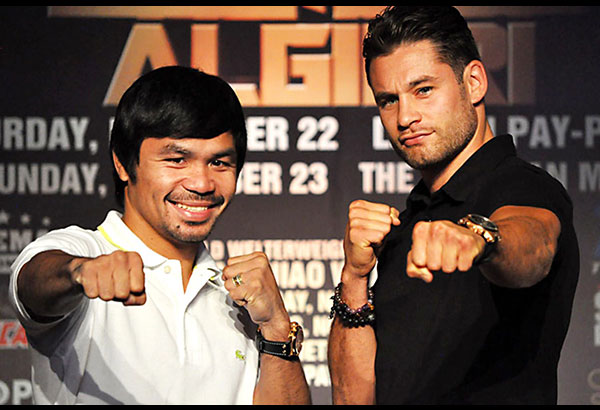 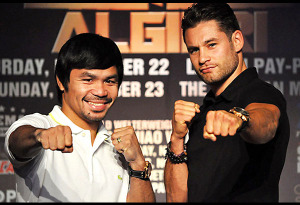 I remember when the match between Manny Pacquiao and Chris Algieri was announced. It was an unexpected but understandable union of two outstanding talents that we don’t often get to see in boxing.

In terms of name value, Pacquiao is this worldwide phenomenon whose aura is so huge that not even getting face-planted by Juan Manuel Marquez two years ago was enough to dent his image. On his way up through the weight classes, when he was destroying top-level fighters in a manner that defied belief, a mythology was cultivated around him by the HBO television network that ensured his name rang out around the globe. People who don’t know boxing know Pacquiao. However, he is the exception rather than the rule and not every fighter can expect a major network to put it’s entire promotional juggernaut behind them.

This is the first time most people will have heard of Algieri. The man from Huntington, New York spent his early combat career in a kickboxing ring and retired undefeated, amassing multiple world titles before putting all of his faith in his fists and going on a twenty-fight unbeaten streak that climaxed with the win against Ruslan Provodnikov, earning him his first world title in boxing. This guy is a real fighter, it’s just that he has no name. Yet.

Algieri’s win over Ruslan is the pivot around which his next fight circles. The ‘Siberian Rocky’ is gym mates with Pacquiao, both are trained by Freddie Roach, and HBO is firing  up the pistons again to create another pay-per-view star. Ruslan has all the ingredients to appeal to the casual observer. He looks like a neanderthal and he fights like one, clubbing opponents in to submission on a relentless march forward, seemingly happy to swallow any punches coming back his way. Even in his two losses leading up to the Algieri fight, most notably against Timothy Bradley in early 2013, he extracted a huge cost from his opponent even on his way to defeat. Some say Bradley hasn’t been the same since. The narrative was only in it’s budding stages; he’s a beast, a killer, and nobody can absorb his power. Then Algieri came along and pissed all over the bonfire. He was not only dropped twice in the opening round, but he came back to box Ruslan’s head off for the majority of the fight with his right eye swollen completely shut. What a way to dispel the legend.

Now Algieri finds himself on the cusp of achieving something great. He has been catapulted from outpointing the little-known Emmanuel Taylor to a world title and a mega-money match-up with the Pac-Man in just two fights. Pacquiao’s scalp should it be claimed would be large enough to drape over your house. It’s all about who you beat, and there is a whiff of revenge about this fight emanating from Freddie Roach, who I’m sure greased the path to this one seeing as he failed to navigate Ruslan to a win over Algieri. He’s sending in the big brother so to speak, and HBO must have been more than willing to comply seeing as Algieri scuppered their best-laid plans to create a monster.

Herein lies what may turn out to be the fatal flaw. The last time Pacquiao gave up this much height to an opponent was when he fought Antonio Margarito in 2010, a static and immobile figure whose eye-socket was shattered beneath the ceaseless pounding of Pacquiao’s fists. It would be naive to expect the same outcome here. Algieri’s wheels are probably his best asset and he will not be parked up, covering himself when the bombardment begins. He will be using the ring, sliding in and out, jockeying for position. His punch output will also be a problem for Pacquiao. He throws long, straight and accurate shots, lots of them. It could be a long night for Pacquiao if he can’t get inside those long limbs of Algieri and connect with his own shots. Would he and Roach have chosen this particular opponent if there wasn’t at least some personal motivation?

However, it is hard to envision Pacquiao becoming completely befuddled on November 22nd in Macau, China when the pair come together. He’s in that strange time in a fighter’s career. At thirty-five years old, his physical gifts have not yet diminished to the point where he would be called a ‘shot fighter’, and his ring intelligence is higher than it has ever been. With the aforementioned knockout loss to Marquez, he was brought back down to earth from the stratosphere, and even though his two wins since have been against a resigned Brandon Rios and a Bradley looking for a one-punch knockout all night, he has displayed the ability to battle through adversity even at this late stage in his career. He still has the speed, his balance is better than it ever was and he is more conscious defensively, even if that stunning power he displayed against Ricky Hatton has mysteriously vanished.

I expect this to be one of the more competitive high-level fights of the year and it’s as close to fifty-fifty fight as you can get when all is taken in to account. Both have the tools to win and it is really a question of who is able to establish their distance and rhythm first.

Algieri needs to maintain the space between them and get that jab working and let the rest of his arsenal feed off it. The right-uppercut could be a handy tool too against the smaller man. He can’t allow himself to be backed up against the ropes and cover up when combinations are coming his way. The roar of the crowd and the sheer amount of punches being thrown at him is enough to sway even the most objective judge in to favouring Pacquiao, even if not all of the shots land clean.

Pacquiao cannot afford to stay still in this fight. In and out, side to side, rolling out after throwing combinations. Speed and accumulation of punches will win the day and the left-hand lead will be cryptonite the way he throws it against orthodox fighters. It would be foolhardy to stand still and let the taller guy punch downwards on to him, regardless of whether Algieri’s record indicates a lack of power. If I have to avoid sitting on the fence for this I would tentatively put a toe down in the Filipino camp, but I’d leave an arm draped over the divide just in case.