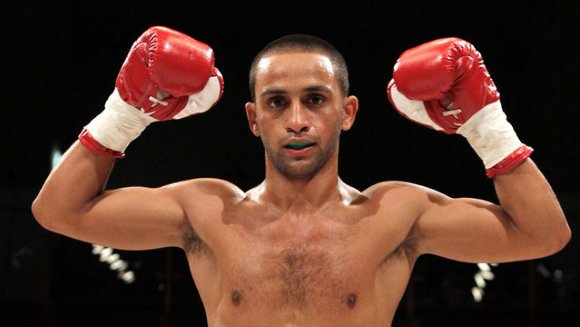 The super bantamweight division is one of the most competitive in the world at the moment with (Guillermo) Rigondeaux, (Toshiaki) Nishioka, (Nonito) Donaire, (Abner) Mares and (Anselmo) Moreno all trying to establish themselves as the dominant force at 122 lbs.

In the UK, Rendall Munroe has been the domestic king for many years but is now under threat from three bright prospects attempting to usurp him;  Scott Quigg, Carl Frampton, and Kid Galahad.

Kid Galahad or Barry Al Awad to give him his proper name, was born in Qatar to Yemeni parents and moved to England at the age of three. Growing up in Sheffield, he gained notoriety due to bad behaviour which led to him being expelled from school and receiving unwanted police attention.

“Before I was boxing I was always in and out of trouble. I was always fighting, causing trouble left, right, and centre. I nearly went to the nick (prison) a couple of times for just being a bad kid really.” Galahad confessed to ThaBoxingVoice.

Like many youths who find themselves on a downward spiral, the youngster learned discipline through boxing and has never looked back since. “The day I met Brendan and Dominic Ingle, they just turned my life around and since that day I never got into a piece of bother again.”

Under the tutelage of the Ingle’s, Kid Galahad developed into a stylish counter puncher which caught the eye of promoter Mick Hennessy. Now the 22-year-old is headlining sell-out shows in his adopted city of Sheffield broadcasting live to large audiences on terrestrial TV station, Channel 5.

In the biggest fight of his career to date, Galahad won the vacant WBC International belt against veteran Jason Booth in only his 11th professional contest. The rising star survived a flash knock down in the first round to secure a unanimous decision by a wide margin despite not being 100% fit.

“It was my first title fight and I got over excited, I over did it with training. Two weeks before the fight, I had to take a week off training because I over trained. I had come down with the cold but I didn’t want to pull out. The only thing I knew was that I had to win that fight.”

As all the best fighters do, Kid Galahad looked back at that fight and took many valuable lessons from it. “Jason Booth is a very good fighter, a very clever fighter. I learnt more in that fight than I’ve learnt from all my other fights.”

In his first defence, the talented youngster outclassed fringe contender Josh Wale, opening cuts over both eyes en route to a 9th round TKO victory. Kid Galahad is now looking to better opposition to send out a message to his domestic rivals in his next defence which is likely to be in late September or early October.

“We’re definitely looking to step up the level opponent. I don’t know who yet, I’m waiting for my manager Dominic Ingle to sort everything out for me. I’m in training, I always train, and I don’t take time off.”

With much of the media attention and hype being focussed on Quigg and Frampton does the Sheffield star feel he is being over looked? “Ye I just feel like I’ve been left out of it but like I said the cream of the crop always rises to the top. There’s no point in me mouthing off saying how good I am because eventually we’re all going to have to fight each other. Hopefully it’ll end up being like Chris Eubank, Nigel Benn and Steve Collins,” he proclaimed.

A series of fights between the three bright hopes and let’s not forget Rendall Munroe; would breathe life into British boxing and capture the imagination of the public. Opinions are divided amongst fans and pundits alike over the potential winner but Kid Galahad has no doubt over the outcome.

“Munroe definitely is the best of all of them, he’d beat both of them but I reckon I’d beat Munroe.”