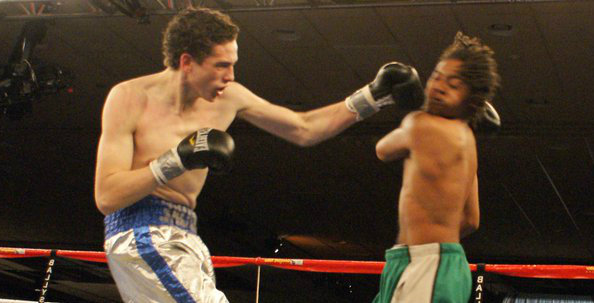 On the undercard of the Paul Williams vs. Erislandy Lara fight in Boardwalk Hall last year in July, there was an interesting looking matchup between a fighter making his pro-debut (and only ring appearance to date), Reggie Jenkins, and a local kid from Millville, NJ stepping into the ring that night with a record of three wins and zero losses, named Thomas “Cornflake” LaManna.

In that fight, LaManna put Jenkins away in the first round. But that’s all it took for my dad, who followers of Tha’ Boxing Voice know as Big Mike, to decide that “Cornflake” was worth watching. We found him taking pictures with ring card girls and watching the fights with his dad, veteran manger Vinny LaManna. After congratulating him on his win, I added him as a friend on facebook and decided to follow his career.

Since that night LaManna has fought four more times, and won all of those fights. His record now stands at eight wins and zero losses. Winning two of those fights by knockout, the other two by unanimous decision, and he was ready for all of them.

He is also ready for his next fight. He will be fighting on the undercard of Hank Lundy vs. Raymundo Beltran on ESPN2’s Friday Night Fights, July 27 at Resorts in Atlantic City, NJ. LaManna is describing this fight as a determining factor in the type of fighter he will become, “This fight is important because ESPN is in the house. I was not impressed with my performance over my last opponent especially considering the quality of opponent. Now Teddy Atlas is in the house, I’ve gotta be good.”

Moving up in weight for this fight is also not a concern. After a last minute step up in weight due to a change of opponent in his last fight, LaManna feels safe fighting at 160, but assures us that after this fight he will be a solid 154-pounder. “I’ve been getting great sparring with Junior Williams, Anthony Young, Decarlo Perez, and Ismael Garcia.” He says, noting that Young and Garcia are also on the card. Although at the moment he is not looking past his opponent, just has a goal in mind, “I’m not looking over him, but I know I’ve got to steal the show.” The opponent mentioned is (as of today) Jacob Stiers of Kansas City, Missouri.  Although his record is a seemingly padded 5-3, LaManna is confident that the fight will not go past four rounds. “I’ll be the faster guy, I’m going to take control and walk him down”.

LaManna recognizes the mistakes he has made in other fights, his lack of a jab, or not using his height as an advantage, but plans to make use of his attributes. “I’m not 6’1” for no reason,” he says. His attitude going into this fight, just like the others, is as though he is the one fighting on the ESPN2 main event. “You have to approach any fight that way,” he says.

It also might be a factor that the 20 year old LaManna is from the near by town of Millville, NJ, and you can count on him having a large contingent of fans in the arena when it is his turn to step into the ring. But that is not always the case. He proved that he would fight anywhere when he scored a second round TKO over Ivory Joyner in a small venue in Arkansas in order to stay active.

Staying active is what “Cornflake” likes to do. At one point in our conversation he said to me, “You know it’s been like three months since my last fight? I thought it was only like six weeks ago.” His last fight was April 26, and although he did not put on a performance he was happy with, he got the decision and admits that it is nothing to dwell on, just do better from here on out.

And that is the plan. We will all see on July 27 if the plan comes to fruition. At the end of a piece like this I usually make a prediction, this time I’m leaving it to the fighter who said, “I don’t want this one to go past four rounds, I’m ready to go the distance, but I just don’t see him going past four.”  And while it’s possible it will go past four, you can bet that the Thomas LaManna you see in the ring on July 27 will not be the one you saw on April 26, and that, is what we, the fans, are looking forward to.