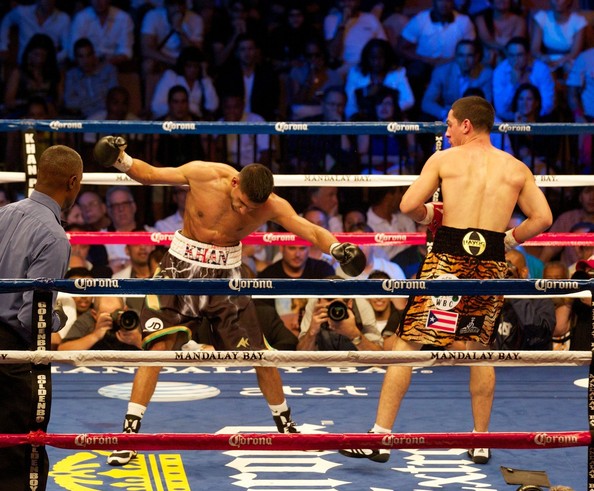 Philadelphia is a fighting city rich in pride and tradition. Saturday night, Danny Garcia just became one of the city’s most beloved champs. Fresh off his upset of Jwelterweight champion, Amir King Khan in Las Vegas in front of a pro Brit crowd, Garcia shocked the world.

Khan came out trying to make a statement with his speed and jabs, jumping on Garcia early who is known to be a slow starter. At the end of the second round a small cut up opened over Garcia eye from the Khan jab. It looked early as if it was going to be a Khan white-washing

Round 3 opened up with more of the same, Khan’s started to open up more and trade with Garcia. In the closing moments of round 3 that’s when it happened. Khan threw a 3 punch combination and Danny caught him with a picture perfect left hook between the head and the neck with Khan hitting the canvas

He got up on wobbly legs with 14 seconds left in the round. The fight turned from being Khan’s statement fight, to him making it out the third round with holding and pushing. Garcia landed a few more shots but couldn’t get him out.

While in the corner it was observed that no one threw any water on Khans face after the knockdown, which is a critical error because if a fighter is dazed, that’s a tool used to refresh the fighter. In round 4, Garcia turned into the hunter sitting down on most of his shots; while Khan fought back trying to fend the predator off. It was apparent Khan’s legs weren’t there.

A right hook sent Khan down in the fourth as he made it up for the count, most people could see the end was nearing. As time progressed, Danny became the stalker taking his time, not trying to punch himself out but placing his shots carefully. Toward the last minute of the fourth Garcia caught Khan with another left hook and by that time referee Kenny Bayless could see Khan had nothing left. He called a halt to the bout with a new WBA and ring magazine champion crowned.

After the bout, Danny wanted to thank everyone; his family, his manager, and also said his father talked trash 23 times and 23 times he backed it up. Khan was gracious in defeat this time because there was no one to blame but himself.

Going into the fight Garcia was a 5-1 underdog in most betting books. Most odds makers thought he was to green I guess. He proved everyone wrong including me, who thought Khan’s speed would be too much for the young champion. Coming into the fight Khan had dreams of a fight with mega star Floyd Mayweather. That all came crashing down and now it’s back to the drawing board.

For Garcia, he has plenty of options. There are some whispers that he will have a big fight with Zab Judah or a with Lucas Matthysse. Wherever Danny goes from here, he is going earn him another career high payday and more accolades. Last year, we lost former all time great Joe Frazier who was known for being the king of the left hook Saturday night. Garcia has the new Philly left hook and would have made Smoking Joe proud!