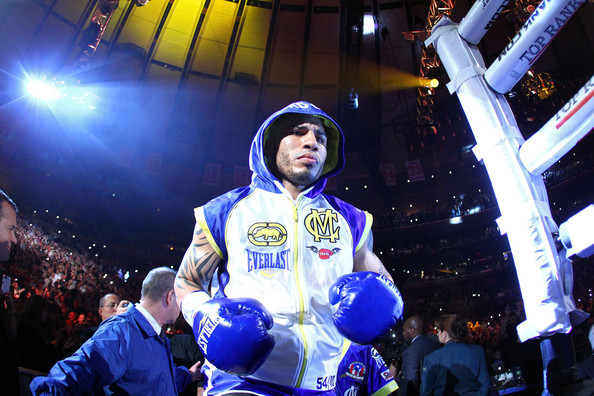 On May 5th, Miguel Cotto put on one of the best performances anyone has had against arguably the best fighter in the world today, Floyd Mayweather. Cotto, disappointed with the wide scores on the card, immediately left the ring and headed to the locker room. Although he did grant a post fight interview in the locker room, people were surprised at the action because that is not typical of Miguel Cotto. ThaBoxingVoice.com had the chance to talk to Miguel’s best friend and manager, Bryan Perez, regarding that matter and all things Miguel Cotto.

“Miguel was a little upset at the decision but he has nothing to be ashamed of. After the fight, the fans and the people were giving Miguel good words and praise on the fight. He was happy for that and has moved on,” Perez told ThaBoxingVoice.com

Perez has been through it all with Miguel since their first meeting in 2003. While working as a television producer, Perez was a fan and did a feature on Miguel Cotto for a new boxing show for the network, Telemundo. The two hit it off and were friends ever since. From that friendship, in 2005, Miguel Cotto Promotions was born.

Since then, not only has the promotion taken off but the stature of Miguel Cotto rose to a level that only a few fighters in the sport can say they are, they’re own boss. “Miguel Cotto fights under his own banner now. Of course, we are willing to work with any promoter for a co-promotion. It falls under the same model that Oscar De La Hoya and Floyd Mayweather, Jr used. It’s exciting and a privilege, and we are blessed to be in that position,” said Perez

Because of the name Miguel Cotto and the hard working team behind him that includes Perez, Hector Soto, and Gaby Penagaricano, Miguel Cotto Promotions has became a stable in the Puerto Rican boxing scene. With 12 shows lined up this year, and probably double that lined up for next year on television, things are looking up for the team. However, Perez says, “The ultimate goal for the company is to be at the level of a Showtime or HBO.”

While there are multiple things associated with the success of Miguel Cotto, whether it is the promotional company or his successful Ecko Unlimited clothing line, Miguel is a fighter first. He is slated to return December 1st in New York City, where he’s sold more tickets than anyone as fighting attraction in the last decade.  Perez shed some light the event and what options Team Cotto were looking at. “Miguel is a proven star and sells pay-per-views, so his next fight will probably be on pay-per-view,” Perez said regarding the December 1st date.

The opponent however seems to be an open list and Team Cotto are examining every option including a move up in weight.  “We have an open list of really good opponents to give a great show. Miguel is open to many things. Whatever option we can create in the 154 lb division or the 160 lb division, we will. Miguel has always wanted to go for that 4th division title so he could be the first Puerto Rican to win a title in 4 weight divisions,” said Perez on Miguel’s next foe.

Miguel Cotto to most is a very small Junior Middleweight and should he move up to 160, he will be a tiny middleweight. But that doesn’t deter Team Cotto who said they have their eyes on all the upcoming middleweight fights. When asked about the winner of Felix Sturm and Daniel Geale, Perez said, “We’re looking at all the middleweight fights and when Miguel comes back from vacation, that’s certainly a fight we’re paying attention to.”

One man that has always called out Cotto has been the recognized middleweight champion of the world, Sergio Martinez. Martinez has a big fight coming up against Julio Cesar Chavez, Jr. The chances Martinez has at landing a fight according to Perez, depends on the outcome of his fight with Chavez. “He’s a name we’re looking at and he’s always talking about a fight with Miguel. Sergio Martinez is not attractive as far as being a star. He’s coming off of a fight he had in the smaller Wamu Theatre in New York, so he’s not a ticket seller. So we’ll just have to see after his fight.”

A fighter’s name who is big enough and is a ticket seller is Saul “Canelo” Alvarez. To most people, that is the second biggest money fight to be made aside from the obvious Mayweather-Pacquiao. Perez kept it short and sweet regarding a possible Cotto-Canelo fight. “He’s an option and one of those names out there. We need to see what happens after his September 15th fight.”

Whomever Cotto chooses it will be an event in New York City. Team Cotto has many outside the ring options but it’s clear from the talk with Bryan Perez, Miguel intends to box for a few more years and the world will watch when he fights.

For Full Audio of the interview click here: http://www.blogtalkradio.com/thaboxingvoiceradioshow/2012/07/15/bryan-perez-nonito-donaire-flilipinoflash