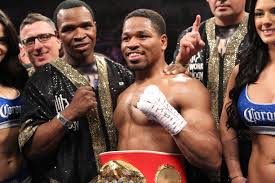 After Shawn Porter lost his IBF title belt against Kell Brook, Kenny Porter analyzed the fight and gave his assessment. The biggest drawback he found was the amount of times both fighters were allowed to clinch.

“There’s a four punch count difference landed on this fight, but I counted Brook holding Shawn 80 times in seven rounds. We are not making excuses, we come to fight.”

Due to the Brook fight, Kenny Porter has implemented a strategy in his son’s training regime to combat the issues of clinching.

He explained, “I highly doubt the next guy we fight is going to be able to hold us like that because we are going to work on it. We are going to prepare for that in a lot of ways. That will be a part of the preparation for anyone else we fight. If someone watches that fight and says this is the way to stop Shawn, you have to grab him and hold, well good luck with that.”

Kenny Porter also discussed his desire for his son to rematch Kell Brook, but the Brook camp does not seem too interested in the offer.

“We can’t get the rematch, he’s not going to rematch us. We understand that he has no interest in a rematch. He probably doesn’t think he can hold us that long again. Why do you think he was holding? He was holding so he wouldn’t get hit. He didn’t block the punches, he didn’t slip the punches and counter us; he held us so he wouldn’t get hit. You could make it out to what you want it to be but he’s not that interested in taking the rematch.”