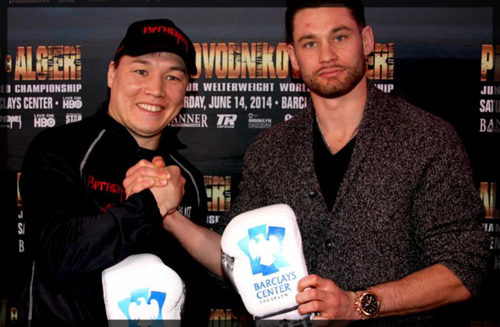 Tonight on a special edition of HBO’s “Boxing After Dark” live (10PM ET/ 7PM PT) from the Barclays Center in Brooklyn, NY., two world titles will be on the line as WBO junior welterweight champion Ruslan “Siberian Rocky” Provodnikov (23-2, 16 KO) of Russia makes the first defense of his newly crowned title as he takes on WBO#13 ranked contender Chris Algieri (19-0, 8KO) of Huntington, NY, in the 12-round main event. Opening up the telecast WBO junior middleweight champion Demetrius “Boo Boo” Andrade (20-0, 13 KO) of Providence, RI,  will also make the first defense his title as he battles WBO#1 contender Brian Rose (25-1-1, 7 KO) of England in a 12-round bout.
Fighters over the years frequently receive the opportunity to fight for world titles and come up short on the big stage however not many were able to survive and prevail in the hearts of many boxing fans like Ruslan Provodnikov. Sixteen months ago a fighter now known as “Siberian Rocky” was perceived and labeled as an “ESPN” fighter coming into the biggest fight of his career against then unbeaten Timothy Bradley. With all odds stacked against him, Provodnikov forced the fight and pressured Bradley into roughest fight of his career while scoring a knockdown in round twelve yet only to come up one point short on two of the judges scorecards in what became many publications “2013 Fight Of The Year.” That night many fans walking out of the StubHub Center in Carson, CA, realized that in addition to Provodnikov getting the short end of the stick on the cards believed they were highly entertained by the come forward slugging style of Provodnikov and were buzzing to see him again. The 30-year old Russian’s confidence continued to soar through the roof as he proved his worth once again on the big stage to compete at the top level last year versus Mike Alvarado. In what was supposed to be a homecoming of sorts for Alvarado in his hometown of Denver, CO, Provodnikov had other plans in mind. Provodnikov blitzed Alvarado from the opening bell landing big power shots all night en route to an impressive 10th round stoppage crowning him with the first world title of his career. Provodnikov throughout his career has always been the “hunter” coming into the ring although tonight the roles with be reversed while coming in a world champion tonight for the first time he will become the “hunted”. “In the ring it will be the same hungry fighter who has nothing to lose and is willing to do anything to win this fight. I’m not afraid to lose this fight or any other fight because I know the title or the win doesn’t get you the money or the respect or the popularity. The support of all my fans you can’t take that away from me.” Provodnikov stated at the final presser. Plenty is at stake tonight for Provodnikov if he can indeed take care of business tonight versus the upstart Algieri as his name has been put in the mix as a possible future opponent for Manny Pacquiao as well as a possible rematch with Timothy Bradley.
The 30-year old Algieri hailing from nearby Huntington, Long Island, NY., comes in the favorite among local new yorkers and should have a solid fan-base behind him as he walks into the squared circle tonight. Algieri comes in unbeaten yet untested up to this point in his young career. Algieri was entrenched in many endeavors early in his career, a former kickboxing champion as well receiving a bachelor’s degree from Stony Brook University and also a Master’s degree from New York Institute of Technology. Algieri is a slick orthodox boxer who likes to use his movement to create angles and mix up the head and body attack with his consistent jab work. Provodnikov in the past has been susceptible to pure boxers (Herrera, Bradley) who can use subtle movement creating angles to get there punches off while keeping there work-rate at a high level.  Algieri is a tall junior welterweight at 5’10 and holds a distinct reach advantage of six inches over Provodnikov which could loom large if Algieri is able to dictate the pace by popping the jab consistently to keep Provodnikov at bay while opening up the rest of offense. Tonight Algieri will take a giant leap in class tonight as his stiffest competition to date (Bayan Jargal, Mike Arnoautis and Emmanuel Taylor) all went the ten round distance. Algieri understands Provodnikov is a different animal nevertheless realizes he needs to be at the top of his game tonight to pull off the upset, “The hard work is done. It’s time to go out there and fight. The time for talk is over. I’m fully prepared to be here. This is a dream come true and we’re ready to rock.” Algieri stated at the final presser. The poise of Algieri will be key while Provodnikov loves to apply the pressure, the light punching Algieri has to endure the initial onslaught and try and take Provodnikov deep into the fight if he intends to stand a chance tonight.
TV: HBO (10PM ET/ 7PM PT)
Vegas Odds
Provodnikov -750 vs Algieri +475
Andrade -1400 vs Rose +750
Predictions
Provodnikov – 9th Rd KO
Andrade – 5th Rd KO
2014 Record
69-13
Last Week
3-1
Tweet