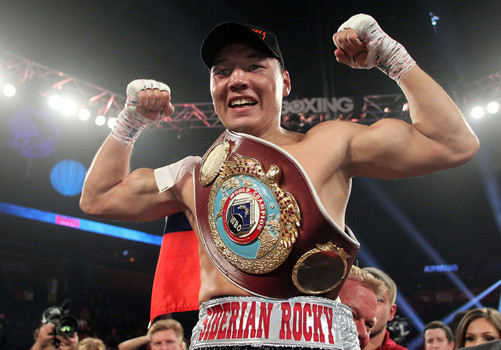 Ruslan Provodnikov has come a long way from being known as an ESPN 2 fighter. In the past year, he went to war with Tim Bradley in the fight of the year of 2013. Although he lost, it did not come with success as he elevated his status as one of the toughest fighters in the game. He followed up that performance with an upset victory of Mike Alvarado in his hometown of Denver.

Now while he didn’t land a Juan Manuel Marquez, Manny Pacquiao, or Tim Bradley type of fight, he landed his 1st HBO main event as the A-side of the equation in the state of the art Barclays Center in Brooklyn. Provodnikov will take on Long Island’s Chris Algeri on June 14th where there should be a house divided as the Russians from Brighton Beach will be in the building to counterpart Long Islander’s coming for Algeri.

Barclays Center is a venue exclusive to Golden Boy and particularly Showtime events.  so it says a lot as to the Nets owner Mikael Prokhorov wanting a Provodnikov fight staged in his building being it is an HBO fight.

With the Eastern European block invading the east coast with Gennady Golovkin and Sergey Kovalev making it their second home, Provodnikov hopes the trend continues. “If this arena becomes a lucky arena, I’ll definitely be my second home,” Provodnikov told ThaBoxingVoice.com through his manger Vadim Kornilov. “It feels great. It’s a great honor to be mentioned with those 3 guys. We changed something in the sport and we made history. But now I plan on continuing my own history. I will follow that past as well and all 3 of us will continue to keep that trend.”

A trend that might be different is the rumored Pacquiao move down to 140 where Provodnikov holds the WBO version of the title. Provodnikov just wants the biggest and best fights and would welcome a fight with his former sparring partner.

“It’s part of the business. We have the same trainer. It could be something that could happen and I don’t see anything wrong with that,” explained Provodnikov.

“I do it for very fight.im a big supporter of it. I encourage my opponents to do it but if they’re not going to do it, I’m not going to force them to do it. There’s been a lot going on in the sport in the aspect. If he doesn’t want to do it, that’s on him. I’ll fight guys that don’t want to do it. But I think if they don’t do it, they don’t support the clean sport like I do because it shows how we train and how we do it cleanly.”