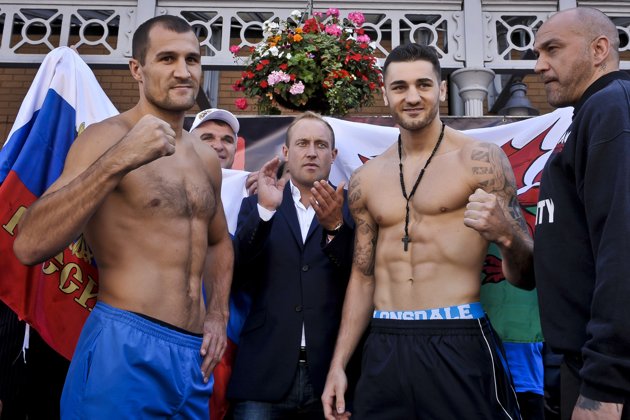 This Saturday, in the UK, HBO will be presenting a Championship bout between the WBO Light Heavyweight Champion, Nathan Cleverly, squares off against 1 of the top KO artist in the division, Sergey Kovalev. This is 1 of those fights for the true boxing fan as neither of the 2 names are flashy to the casual fan, however, both are good boxers and at the top of their division. By the time these 2 are done, we should have a clear contender for any of the other champions in the division like Adonis “Superman” Stevenson or “The Executioner” Bernard Hopkins.

Nathan Cleverly is a good, solid boxer from Wales. The young 26 year old comes into this fight with an undefeated record of 26-0 with 12 KOs. His 2 most big name wins were a TKO win against Karo Murat 3 years ago and a majority decision win against Tony Bellew 2 years ago. He doesn’t have too much power, but he is a good technical boxer that effectively uses his jab. He has been the WBO champion for over 3 years and he’s definitely not ready to give it up. Surprisingly, Cleverly actually predicted a KO win against Kovalev, but with his lack of power shown in the past, seeing is believing.

Sergey Kovalev comes into the fight also with an undefeated 21-0-1 record, but also with an impressive 19 KOs in those bouts. None of his fights have ever the 9th round and only 3 of his fights have even made it past the 3rd round. However, he has not faced anyone good until his last 2 bouts. Now in those bouts, he had 2 impressive 3rd round TKO wins against Gabriel Campillo and Cornelius White, but now this fight will take place in a country he has never fought in before, the UK, and if you’ve never seen a UK crowd with a UK fighter fighting, then you need to. It is a dramatic event and like walking into the lion’s den.

This fight will come down to 3 things. First, is Cleverly’s numerous middle tier fights more impressive than Kovalev’s 2 better fights and then 20 below average wins? Second, will Cleverly be able to keep Kovalev at bay with his jab? Lastly, how will Kovalev react in his 1st fight in the UK? I consider Kovalev the newest of the “hot name” boxers that has sprung up over the past 2 years like Golovkin and Matthysse, fighters that haven’t fought a lot of high level fighters, but as to do move up the rankings, they have continued to knockdown or knockout everyone that steps in front of them.

I’m a person that favors boxers with pop as long as they are above average boxers. Kovalev fits the bill for this and even though Cleverly may be able to hold him off early, I think eventually the power will get to Cleverly. I’m going with Kovalev by 6th round stoppage. No matter who wins, I think Stevenson and Hopkins with both have a close eye on it for a future opponent. It should be a good fight of contrasting styles and as I said before, if you haven’t seen a UK fighter fight in front of his home crowd, you’re missing out, enjoy the fight.