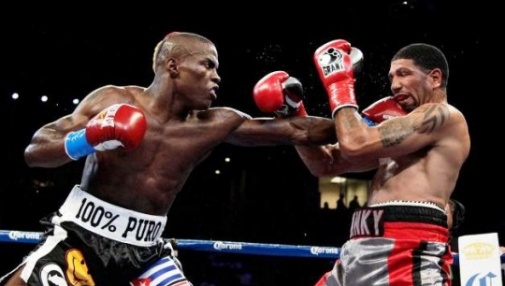 Fans had gotten used to Quillin dropping his opponents, 32 times in his first 30 professional fights, including 11 in his three previous world title fights.  They expected the powerful Cuban-American to put Konecny on the mat and eventually into a deep sleep.  Konecny, who had announced prior to the fight that he would retired after fighting Quillin, appeared to be more interested in surviving than trying to wrest Quillin’s WBO belt from the still hungry fighter.

Konecny stayed in a peek-a-boo stance, protecting his head and avoiding a physical confrontation with the much larger and strong Quillin, from the opening bell through 12 rounds, winning only a single round on two of the three judges’ scorecards (120-108, 119-109, 119-109).  “Kid Chocolate” remained in complete control, working off his improved jab and ignoring pleas from the crowd to brawl.

“Fighters and fans can get drunk with power,” Quillin explained.  “They want you to blast out your opponent.  I haven’t gotten credit as a pure boxer because I’ve been so dominant taking out guys but I can box, too.  I said before that fight that I was going to be a ‘finesser,’ making the fight look easy and showing that my boxing skills are at the highest level.  I did just that against a guy who had 50 wins and was the European champion.

“I had to listen to my corner (head trainer Eric Brown).  They had me pressuring my opponent and out-boxing him.  It may not have made some fans happy but I was in the ring to win. I was focused.  People are used to seeing me knockout guys, which is more exciting than cruising to victory by boxing.  Some of the best boxers in the world – Floyd Mayweather, Jr., who is from my hometown of Grand Rapids, Michigan, Bernard Hopkins, and lately, my Cuban brother, Guillermo Rigondeaux – have been booed by people who’ve never boxed in their lives and don’t understand the art of boxing.  I set-up my punches.  I was very consistent and made this fight look very easy.  I can’t make everybody happy.  I gave fans something different than in my other fights.”

Despite being a victim of boxing politics, unable to get a mega-fight, Quillin has hope that, in time, he’ll get into a unification fight against one of the top 160-pounders in the world.  For now, though, he fights the guy in the ring with him, relying on his team (Golden Boy Promotions, adviser Al Haymon and co-managers John Seip and Jim McDevitt) to do their best to eventually make a career defining fight for him.

Sergio Martinez and Gennady Golovkin are the marquee names in the middleweight division.  The former is fighting Miquel Cotto on June 7, while the latter appeared to be heading towards a showdown with Julio Cesar Chavez, Jr.

Quillin has already returned to the gym and awaits news about his next fight.  “I just take ’em as they come along,” Quillin said.  “At one point I thought I was fighting Danny Jacobs in my last fight. If that’s the only big fight out there for me, we’ll fight as long as the price is right.  Danny’s fought for the world title once and came up short.  I’m a big fan of his story and we’re two Brooklyn guys who will have to put our friendship aside if that fight is made.

“Everything is in God’s hands.  There are a lot of things I can’t control in boxing. I think my big fight will happen someday, as long as the public has interest and fans get behind it.  I believe it will happen because of demand.  These fights have been building up and we’ll see what happens in the future.”