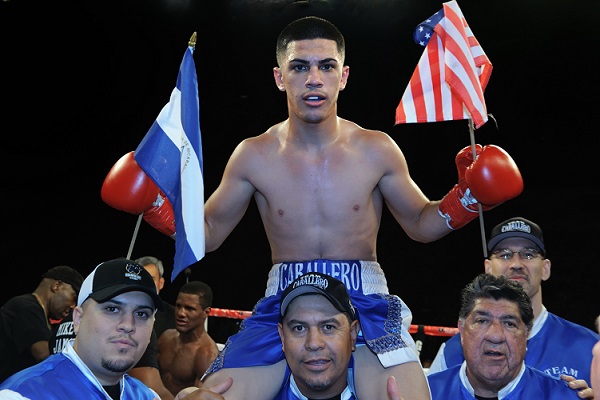 Randy Caballero is a young Nicaraguan fighter who was born in the U.S. Some may say he is Nicaraguan because his father is Nicaraguan, it is in his blood. Some may argue that he is American due to where he is born and that his mother was born and raised in the U.S. Either way  you look at it he comes from a nationality that knows how to fight.

Caballero is proud to be Nicaraguan and always goes to the ring with the Nicaraguan flag. The fact that he was born in the U.S., is talented and has no problems speaking English makes him very marketable. Other fighters from the Central American country do not get the same recognition and a part of that could be the fact that they are in smaller weight classes. The talent is there but it is unrecognized when you look at the nation’s top fighters like Roman Gonzalez and Carlos Buitrago who by all means are very talented and possess qualities of top stars. Caballero believes that such talent should get the exposure that he gets.

“I support every fighter that comes out of Nicaragua because I’ve been out there and seen great fighters,” said Caballero. “The reason I walk out with the Nicaraguan flag is because I’m proud to say ‘I’m Nicaraguan’ and to let the people know that there are great fighters from there. It’s really hard for them to get the exposure they need which I feel they should get more of.”

Caballero was born and raised in California which has a rich diversity of Latin Americans. The Bay Area is a very diverse area and has a big Nicaraguan population. Caballero would love to fight there someday if Golden Boy Promotions ever puts on a card there.

“There’s a big Nicaraguan population out there in the Bay Area. I’ve been out there and I would love to fight out there but like I said it’s all on Golden Boy if they have cards out there.”

Focus and hard work are some of the key elements Caballero uses to be successful. If he continues on the current path that he is on and wins a world title he will make boxing history and Nicaraguan history as the first ever Nicaraguan-American to ever win a world championship.