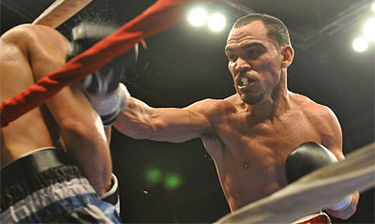 Every athlete has their journey, but with boxing you get journeys made of epic proportions. Maybe I’m biased, but it seems like a fighter’s experience is made of poetic intricacies mirrored by few. With boxing, as opposed to team sports, you get a real personal experience from fighters. You learn that their struggles are harsh, real, and enduring. I hope I’m not making light of these struggles, but in them you find poetic stories that captivate the soul of humanity.

Raymundo Beltran, 31, is one of those fighters whose story is both enduring and poetic. Beltran is scheduled to fight standout lightweight Hank Lundy in a 10 round affair this Friday as part of the main-event for ESPN’s “Friday Night Fights.”

For Lundy, this is an opportunity to further his 4 fight winning streak and continue making a case for a world title shot at a top fighter in the lightweight division. Beltran, on the other hand, is coming off a unanimous decision loss against Luis Ramos Jr. and has a record of 3-3 in his last 6 bouts. Beltran is at a sort of crossroads in his career. He’s made tough fights even in his losses, but the fact remains that Beltran is nowhere near title contention at this point and would need to rattle off some consecutive wins in order to make any noise.

That is precisely what he is looking to do. Beltran, most famous for being a Manny Pacquiao’s sparring partner, spoke with Thaboxingvoice.com and expressed the fact that he doesn’t want to be a “stepping stone” fighter and believes that he must take full advantage of his opportunity against Lundy.

“It’s the kind of fight I’ve been trying to get so that I can show my talents. We’ve been working hard getting ready for this fight, [Lundy] is a dangerous guy. They might be taking me light, but I really believe I can win this fight,” Beltran said.

Hank Lundy (22-1-1) has been lobbying for an Adrien Broner fight over the past few weeks and it’s safe to say that Lundy has big plans in store should he get the victory. I wouldn’t go as far as to say Lundy is looking past Beltran, but it’s obvious that Lundy feels that his latest triumphs are merely the beginning of his promising career. However, are Lundy’s big plans enough distraction for Beltran to take advantage of and pull the upset?

“I’m just focused on this fight, if he’s taking me lightly, it will be good for me, it motivates me and it could [work against Lundy]. A lot of fighters get overconfident and get knocked the f*ck out,” Beltran said.

If Beltran can muster up the kind of performance that earns him the victory it would be hard to say what’s next. I mean the door would certainly open for other opportunities, but it would be an uphill battle to say the least. Beltran knows this, but he just hopes that the chance to excel is afforded to him.

“I’m a free agent and if I win I hope I can take [Lundy’s] spot in the [division]. It’s up to the promoters if they’d like to give me the chance. I believe in what I do, I believe in my abilities, but I don’t have control over the rest of things.”

“I’ve been the stepping stone lately. To me, it’s about taking advantage of opportunities and all I have to do is knock these guys out. What the promoters do is create fake champions; I’m a true fighter and I’m going to prove it. [Throughout] my whole career I feel like I’ve been robbed 3 or 4 times.”

Beltran spoke of his record in the context that for some fighters a loss is like a plague, in that it becomes what defines the fighter to promoters, networks and media. However, for other more fortunate, well-connected fighters a loss is a minor speed bump in the grand scheme of things. He’s right, networks and promotions cram fighters down our throats sometimes; the kind of fighters that they believe the consumer should get accustomed to and that kind of favoritism is unfair. Fighters sacrifice and poor their hearts into a game that offers nothing back once their careers are finished.

Beltran is the kind of fighter that makes tough fights and he can bring the best out of his competition. Skeptics will insist that is good enough for Beltran and he should be satisfied with being the role-player kind of fighter. Perhaps many think that his success as a sparring partner for one of the best pound for pound fighters in the world is all you can ask for.  Although Beltran is grateful for the benefits that come with being a Pacquiao training aid, but feels like he has more to offer as a fighter.

“[Pacquiao’s] helped me a lot; it kind of put my name out there. It’s a unique experience and it’s something I can tell my kids about when they grow up. It’s a dream come true, I never thought I’d be able to help one of the greatest champions of all times and be his sparring partners for 8-9 years, but I want to make my own name. I learned with him to be more patient. With [Pacquiao] it’s always intense and you don’t rest for a minute,” Beltran said.

“Mexicans don’t talk; we show heart in the ring. That night [against Lundy] will be my night.”

I think many people, me included, overlook the fact that fighters fight as a means of income. For many, boxing is this poetic art form, a sweet science crafted by fighters in search of greatness. Heroics, however, don’t pay the bills. Boxing is a livelihood for men and in order to put food on the table, they must win. That is why boxing is so relatable to the common man because it is the pursuit of happiness that plays out inside the ring that is so identifiable. The punches regular men take are usually in the form of mortgage payments, job promotions, and financial stability. The crazy part is fighters take all of those same metaphorical punches we do and then they go into the ring and take them for real. Fighters are special kinds of men that endure a special kind of punishment. Ray Beltran is special for these reasons amongst others, and this Friday he’ll try to prove it inside the ring.