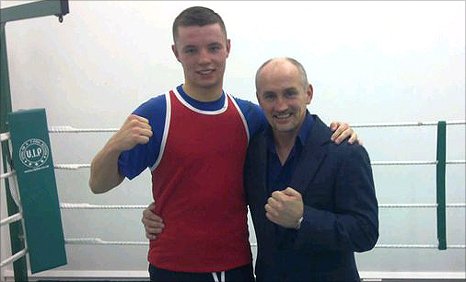 No matter how much natural talent you possess to reach the upper echelons of the sport, you need a good manager and promoter behind you.

One man who learnt this the hard way is Scottish prospect John McCallum.

In 2010, he turned pro signing with Paul Graham of Prospect boxing. McCallum made a bright start to his professional career beating three tough, if limited, journeymen without conceding a round. Standing at 6’2″, with an excellent amateur pedigree, the welterweight could have boxed behind the jab but instead chose to engage with his opponents, showing skills fighting on the inside. This crowd friendly style soon earned him a large support, with John personally selling in excess of 200 tickets for fights away from his native Edinburgh.

Since then his career has stagnated, with Graham unable to find him any suitable opponents, the pair parted company. This along with a string of injuries including two broken hands, a burst ear-drum and broken ankle have kept McCallum out of the ring for the best part of a year. Now successfully recuperated, he is ready to make up for lost time.

“I just want loads of fights and to get my record up to 10-0 quickly. I just want to start taking titles. I’m interested in any opportunity, Prizefighter, anything like that. If I get a phone call I’m more than happy to fight on any of those shows,” John told ThaBoxingVoice.com

“I’d fight anyone to be honest, I have a burning fire to get back in the ring and prove I’m the best Welterweight in the country.”

Many fighters claim they are willing to take any fight but talk is cheap and few deliver on their promises, yet with McCallum it’s genuine, he is a determined to put the setbacks behind him.

McCallum has now started the search for the man to guide his career and allow him to fulfill his undeniable potential.

“I’m just looking for a fair and honest guy who’ll get me fights; someone who is going to build me. I’d never rule out moving away, I’ll box anywhere as long as I’m fighting regular.”