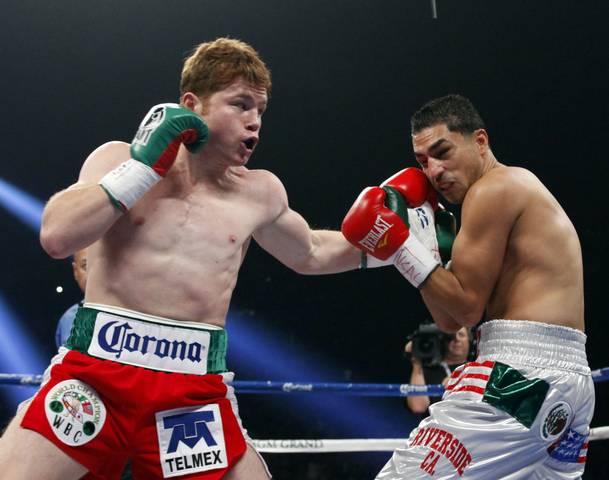 NEW YORK (Sept. 18, 2012)–In a big night for boxing, Saturday night’s SHOWTIME CHAMPIONSHIP BOXING telecast of “Knockout Kings” scored record ratings for its headlining fight between Canelo Alvarez and Josesito Lopez with over one million viewers. The blockbuster event, promoted by Golden Boy Promotions and Canelo Promotions in association with Goossen Tutor Promotions and Thompson Boxing Promotions, was held at the MGM Grand Garden Arena in Las Vegas and featured an action-packed bout on the undercard between welterweights Marcos Maidana and Jesus Soto Karass, which helped garner the second-highest rating for a boxing telecast on the premium network since 2007.

Canelo did not disappoint with a dominating fifth-round technical knockout of Lopez in front of a sold-out crowd celebrating Mexican Independence Day weekend. In what is sure to be considered a Fight of the Year candidate, Maidana scored a technical knockout over Soto Karass in the eighth round.

“We always promise to deliver the best fight cards top to bottom and are thrilled that the Knockout Kings event did just that and shattered the viewership records on SHOWTIME,” said Richard Schaefer, CEO of Golden Boy Promotions.  “We knew this quadruple header was going to produce big numbers and are excited that we not only sold out at the MGM Grand Garden Arena, but also that we broke records on SHOWTIME.”

“We’ve seen steady increases in viewership for our marquee championship boxing events throughout the year,” said Executive Vice President and General Manager for SHOWTIME Sports Stephen Espinoza. “It makes perfect sense that the budding star of Canelo Alvarez delivered our best performance thus far.  We expect to build on this success with future Canelo fights and, of course, on the incredible lineup we have planned for SHOWTIME CHAMPIONSHIP BOXING this fall.”

Saturday’s fights will replay tonight, Tuesday, Sept. 18 at 10 p.m. ET/PT on SHOWTIME EXTREME and is available anytime at SHOWTIME On Demand through October 15.