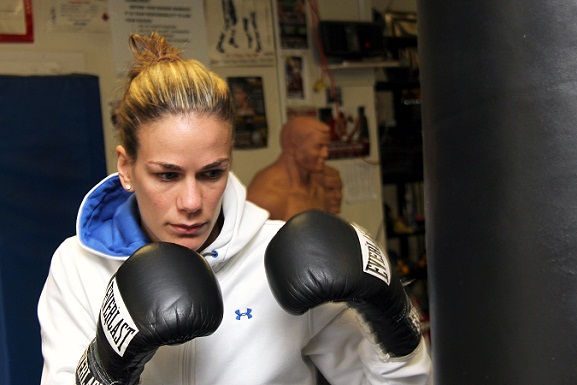 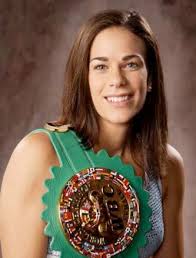 On March 11th, KO Boxing  hosted its first event of the year titled “Retribution”  at the Shaw Conference Centre in Edmonton, Alberta, a night where Jelena Mrdjenovich avenged her loss from last year to Edith Soledad Matthews and became an eight-time world champion.
The opening bout  of the night was an entertaining one in the lightweight division in which Eric Taylor (3-1, 3 KO’s) took on former MMA fighter Brad Nicholsen (0-1). Taylor was boxing in the first round but Nicholsen was able to land shots quite often on Taylor due to his reach. Taylor was able to reach in and wobble Nicholsen on a couple different occasions in the first round but Nicholson would return the favor and wobbled Taylor at the end of round one.
Taylor was able to open a gash on the top of Nicholsen’s head early in the second round which bled constantly throughout the round. Taylor was able to land quite a few body shots in the round which at that point were the only body shots thrown in the fight.
Early in the third round, Taylor landed a solid counter left hook that made its mark. Shortly after, Taylor would land a counter right hook which would send his opponent down to the ground. Taylor then jumped on his opponent after the knockdown and finished him off with a counter left hook that sent him down, hard and out but it was not so much from the punch as it was from his head hitting the canvas hard from the fall. Fish was 2 minutes and 21 seconds of the third round and it marked Taylor’s first actual knockout victory.
In the second bout of the evening, hometown fighter Flavio Michele (3-1, 2 KO’s) suffered the first loss of his career when he took on Marko Szalai (2-1, 1 KO). In the first round, Marko landed a few good shots early plus a few good counters. In round two, Marko continued working over Flavio who seemed pretty hurt by the end of the round. The third round some more action from both fighters but it was Marko who saw the better of the exchanges. Flavio came out determined in the fourth round but his momentum quickly ended as Marko began landing hard shots constantly on him. The end result was a unanimous decision in favor of Marko Szalai with all three scorecards reading 39-37.
The first heavyweight bout of the evening was a quick one in which hometown fighter Stan Surmacz-Ahumada (4-0, 4 KO’s) took on Tim Chemelli (0-1). Chemelli was on the defense for 95% of the fight. As soon as he felt the power of Ahumada he went into a defensive shell and hardly came out which prompted the referee to stop the fight after less than a minute due to the punishment being dished out.
In the following bout, former Edmonton Eskimo Adam Braidwood (3-1, 2 KO’s)  took on former MMA fighter Victor Valimaki  (3-1, 2 KO’s). Throughout the first couple rounds, it was a bit of a chess match. Braidwood was more active which had won him the rounds and the sight of blood coming from his nose did not sway the judges in the opposite direction. In the third and fourth rounds, both fighters opened up more on each other but it was too little too late for Valimaki to bounce back to a victory and Braidwood walked away with a majority decision.
Former MMA star and current fast rising boxing prospect Ryan “The Real Deal” Ford (5-0, 3 KO’s) made quick work of David Whittom 12-22-1, 8 KO’s). Ford caught his opponent cold and dropped him with the first punch he landed and it was pretty much over from there. Whittom  was given a chance to fight back but Ford continued to punish him and the fight was over within a blink of an eye.
In the co-main event, Brandon Brewer 18-0-1, 9 KO’s) faced off against Felipe De  La Paz Teniente (16-8-2, 7 KO’s). From the earlier Brewer’s speed and accuracy showed and was quite effective. He would constantly land hard shots but that didn’t stop Felipe from coming forward and landing his own shots. By round four Brewer was able to take it to his opponent even more so and drop him twice in the process and finish off the fight.
The main event between Jelena Mrdjenovich (36-10-1, 19 KO’s) and Edith Soledad Matthysse (14-8-1, 1 KO) prove to be better the second time around as the first fight lacked the amount of action that the second fight produced within the first half.
In the opening round, Matthysse showed good boxing skills as she would move around the ring and clinch from time to time when necessary but not excessively and land several eye-popping shots on Mrdjenovich. As the rounds continued the clinching became more excessive but Mrdjenovich was able to get in some great body shots which would deter the champion from clenching as often. Things seem to be going well for Mrdjenovich the middle rounds until a big headbutt opened a gash under her left eye which bled profusely. The bleeding caused both fighters to pick up the pace a bit throughout the rest of the fight but Mrdjenovich got the best of it as she sent her opponent down to the canvas in the final round which helped her out on the scorecards as some of the rounds could have gone either way. Mrdjenovich ended up winning a unanimous decision with two scorecards reading 96 – 93 and one scorecard reading 97 – 92.
Tweet