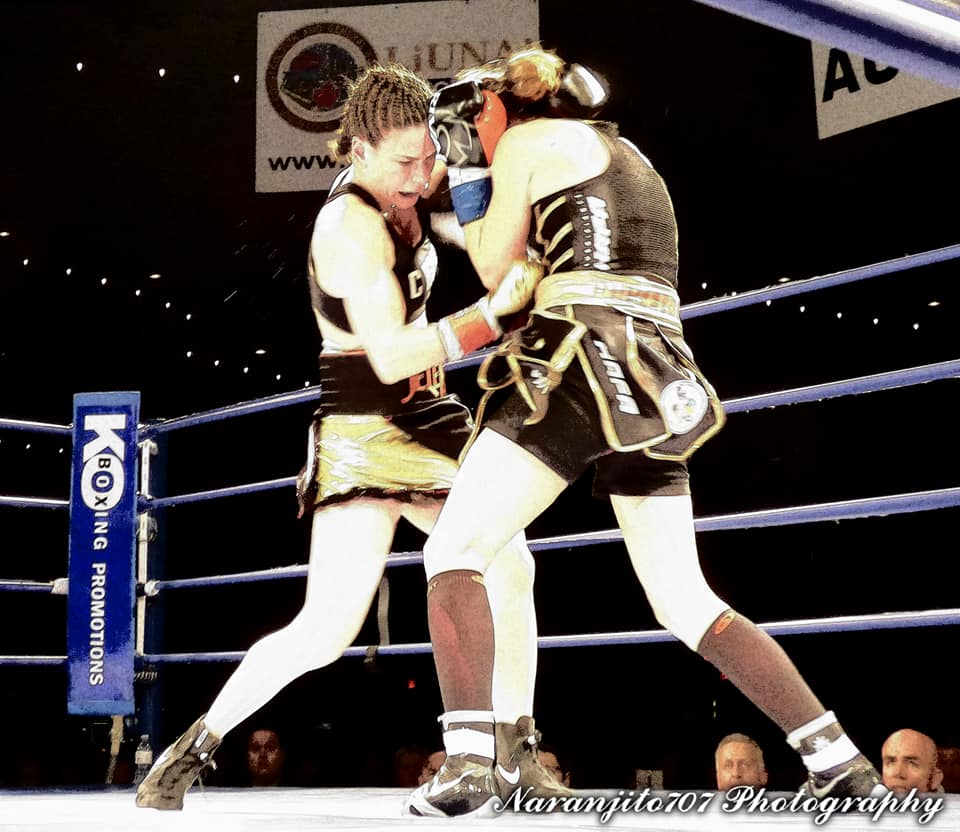 The importance of a milestone varies from each sport and athlete. Some do not care to look at stats and focus on the big picture while others keep count on every single detail. This last Saturday marked a huge milestone in the career of one of women’s boxing best when Jelena Mrdjenovich stepped into the ring for her fiftieth fight as a professional in front of her hometown crowd in Edmonton, Alberta. To say that the fight meant a lot to her would be a massive understatement. She had been making plans for this fight for quite some time but a ban on combative sports in the city temporarily derailed those plans but the ban did not last long and she was able to fight in front of her hometown this milestone.

Mrdjenovich was no doubt the highlight for the crowd as she defended her titles and beat Stephanie Ducastle of France in the night’s main event. The two previously fought nine months prior in France with the bout being declared a draw which served as motivation for Mrdjenovich to remove all doubts the second time around. Mrdjenovich was able to control the pace throughout the fight and had Ducastle reeling from vicious body shots throughout the night. The two would constantly land fouls on each other whenever in close quarters which caused the referee to intervene throughout the fight but that did not slow the action down much. The two fighters were at war throughout the full ten rounds but when the dust settled it would be Mrdjenovich who had her arms raised as all three judges scored the bout in her favor and rightfully so.

In the co-main event, Adam Braidwood put on an amazing display of power when he took on and stopped Hugo Leon of Mexico in the fourth round of their scheduled six round bout. Braidwood controlled the pace and chased Leon down throughout the fight while landing shots to his head and body. Leon would constantly find a spot for his overhand right but there were no doubts left as Braidwood landed an uppercut that sent the Mexican fighter down and out. Up next on the menu for Braidwood is a shot at Canadian heavyweight champion Simon Kean.

Flavio Michel’s knockout streak extends to three as he won a very technical fight against Mexico’s Alejandro Ramos. The two fighters felt each other out in the first round but were swinging for the fences come the second round (while still being cautious). In the third round Michel would put together a combination that would send his opponent on his back to never recover.

Eric Taylor looked great in his bout against Audel Jimenez of Mexico. Taylor has improved over the last couple fights and he was able to land quite a bit on Jimenez but was unable to put him away. Taylor would win every round of their four round bout and cruise to a unanimous decision.

Russian import Artur Ziyatdinov (who fights under Eye Of The Tiger Management) was quite impressive as he dominated Petar Mrvalj. Ziyatdinov stalked his opponent throughout the fight and which only lasted two rounds. Ziyatdinov bloodied his opponent’s nose in the first round and beat him badly for the stoppage victory in the second round.

Raffaele Santoro and Brian Samuel put on a hell of a performance for the Edmonton crowd. Santoro boxed well throughout the fight while Samuel applied pressure to try and get Santoro to brawl. Both were able to land their fair share of shots and in the end the judges saw it go Santoro’s way.

Robbie Cusine continued his undefeated streak against Dimitri Waardenburg in a see-saw fight that saw the Edmonton fighter bleeding from the nose in the first round then having a gash open up above his left eye in the second. Cusine was not phased at all by the blood and was able to come out the victor via unanimous decision.

Julian Klima and Charles Hauver did a great job opening up the show with an entertaining bout that would warrant a rematch. The two traded leather throughout the fight and while neither got the decision, the people in attendance were the true winners of that fight.