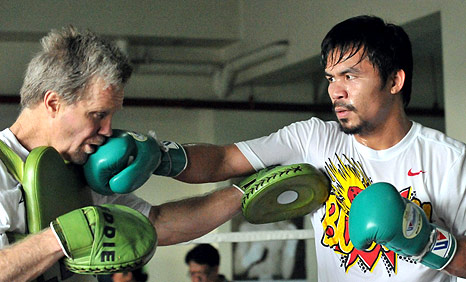 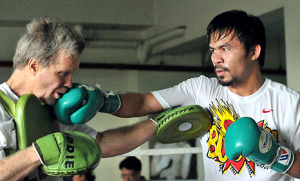 Once Manny Pacquiao vs. Chris Algieri was officially announced, a negative aura initially surrounded the fight. Despite Algieri’s win over Ruslan Provodkinov, certain media members discredited Algieri as a worthy opponent for Pacquiao. As time went on, the boxing world began realizing Algieri is in fact a legitimate threat.

Roach stated, “He [Chris Algieri] definitely deserves to be there.”

His reasoning was due to the fact, “He beat Ruslan Provodkinov, one of the toughest guys out there; one of the best punchers in the world. He got off the deck twice. He showed a lot of heart.”

“It’s going to be a great fight, that’s why we are training so hard for this fight.”

Even though Algieri is not the most celebrated fighter Pacquiao has faced, he is one of the few fighters who has not suffered a recent lost in the welterweight division, before squaring off against the eight division world champion.

·      De La Hoya: Two bouts prior to facing Pacquiao, he won a UD victory over Steve Forbes, and suffered a loss against Floyd Mayweather Jr. In a timespan of almost 4 years before facing Pacquaio, he was 2-2. He also fought Pacquaio at the 147 lb limit.

·      Ricky Hatton: Before facing Pacquiao, he lost his undefeated record against Floyd Mayweather Jr. by TKO. He was never viewed as the same fighter, despite having an 11th round TKO victory over Paulie Malignaggi.

·      Miguel Cotto: Two fights before he faced Pacquiao, he lost his undefeated record to Margarito in devastating fashion, whom was suspected of having loaded hand wraps during the fight.

·      Joshua Clottey: His previous bout before facing Pacquiao was a loss to Miguel Cotto.

·      Antonio Margarito: Two bouts prior to facing Pacquiao, he suffered a TKO loss against Shane Mosley.

·      Shane Mosley: Before facing Pacquiao he was winless in his previous two bouts. One of them being a lopsided decision for Floyd Mayweather Jr.

·      Brandon Rios: Rios was coming off a loss against Mike Alvarado when stepping into the ring against Manny Pacquiao.

Timothy Bradley and Juan Manuel Marquez are the only two fighters who’ve fought Manny Pacquiao at the welterweight division, while experiencing good stretches in their career. Algieri now becomes the third fighter to do so.

The evaluation of every fighter Pacquaio has faced in the welterweight division is not to diminish his accomplishments, but to illustrate Algieri’s worthiness of being in the same ring as Pacquiao. Not only is Algieri at a great moment in his career, his tenacity along with the arsenal he possesses, certifies him as a viable opponent.