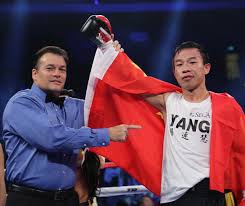 HOLLYWOOD, CALIF. (July 8, 2015) — Undefeated No. 2 world-rated contender “Ik” Lian Hui Yang is going to play to the crowd as well as to his own strengths when battles his unbeaten opponent and top-rated contender Cesar “El Distinto” Cuenca, in the main event of “Victory at the Venetian,” Next Saturday! July 18, at The Venetian® Macao’s Cotai Arena.

The two warriors will be duking it out for the vacant International Boxing Federation (IBF) junior-welterweight world title in a fight that will be streamed live (along with most of the undercard) to the U.S. via www.toprank.tv, beginning at 6:00 a.m. ET.

Yang (18-0, 13 KO’s), from Dalian, China, is attempting to become China’s second professional fighter to win a world title, while Cuenca (46-0, 2 KO’s), from Buenos Aires, Argentina, will attempt to not only make the most of the first world title shot of his 13-year professional career, but cut the deficit to two victories in matching Rocky Marciano’s hallowed mark of 49-0.

“Yang may be the most popular fighter in China today and for one reason, he brings it,” said seven-time Trainer of the Year World-Famous Freddie Roach.

“Yang has only gone the distance once in the last four years. The fans love him because he backs up his cocky attitude with devastating results. He has one-punch knockout power in both fists. He is as much fun to train as he is to watch. It’s no secret that we are training for a knockout victory.

“Yang knows he’s in with a master boxer and the only way to beat a guy like Cuenca is to pressure him. And when we get him on the ropes Yang is going to bang away.

“As the saying goes, ‘Tough guys don’t dance.’ Yang is going to shoot the works in this fight. He wants to bring the title back to China.”

“I am in the best shape of my life and have trained harder than all my previous fights,” said Yang “I have had a great training camp with Freddie and Justin [Fortune] and my sparring partners have really pushed me to the limit. I cannot wait for July 18 in Macau knowing that I have put in the necessary work.”

Their fights will be televised to the U.S, via same-day delay, on Solo Boxeo Tecate on UniMás, beginning at 11:00 p.m. ET/PT. Donaire, in the hunt for another world title shot, will be taking on France’s Anthony Settoul (20-3, 8 KO’s), from Clermont-Ferrand, France, in a 10-round super bantamweight battle. Ramírez will open the telecast in an eight-round super lightweight bout against Ryusei Yoshida (26-7, 13 KO’s), of Kumamoto, Japan.