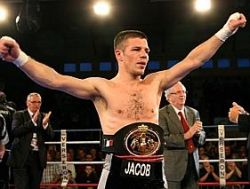 Romain Jacob successfully defended his European Super Featherweight Title tonight with a twelve-round unanimous decision victory over Devis Boschiero in Calais, France. After an intense and action-packed fight, the judges scores were 116-113, 115-113 and 118-111. ThaBoxingVoice.com scored the fight 116-113 in favor of Romain Jacob.

This was the second time Jacob and Boschiero met this year. Jacob dethroned Boschiero in February with a controversial, split decision. This time, the 26-year old Frenchman managed to beat Boschiero more decisively.

The Italian challenger started the fight very strong. He managed to get inside Jacob’s jab and was able to land some hard punches. Jacob was throwing his jab with little authority and looked helpless every time Boschiero slipped it and countered.

However, Jacob was able to adjust. By the fifth round, he put more power behind his jab and followed it up with some good combinations, often ending with a great body punch. The body punches clearly affected Boschiero, as he was breathing heavily already in the sixth round.

Now that Jacob had taken over the fight, Boschiero decided to go all out. A war broke out in the seventh and eight round, where both landed very hard shots. Boschiero seemed to be the stronger and more determined fighter in those rounds. But after these two rounds, the 33-year old Italian was completely gassed.

Meanwhile, the faces of both fighters were both showing the affects of the grueling middle rounds. Jacob was cut above the right eye and Boschiero on the top of the forehead. The referee’s shirt was covered in blood as well.

Jacob took complete control of the next few rounds, while Boschiero tried to hold on and slow down the action. Boschiero tried to put on a late rally in the last round, knowing he was down on the scorecards, but didn’t have enough left to cause any problems for the European Super Featherweight Champion.

Romain Jacob, who is ranked number three by the WBA, number four by the IBF and number nine by the WBC, improved his record to 22-0 (7 KO’s). While Devis Boschiero’s record dropped to 34-3-1.