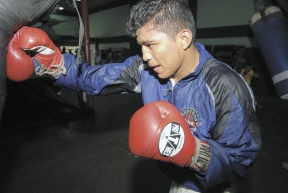 Roman “Chocolatito” Gonzalez is just a couple days away from his stay busy fight with the Philippines Juan Purisima which will serve as a build up for his upcoming title bout with Akira Yaegashi later in the year. Despite the upcoming title bout, Gonzalez has not lost focus on the man who will be in the ring with him. In fact, Gonzalez is dead set on taking his opponent out early so that he can focus on accomplishing what Alexis Arguello did and win three titles in three different divisions with the Yaegashi bout and possibly make history and be the only Nicaraguan to win a fourth title in a fourth division.

“My desire is to get Purisima out of there as quickly as possible and then to focus on the fight with Yaegashi,” said Gonzalez .”I want to win  a third world title and believe I can win a fourth but first things first, I have to focus on Purisima. I feel strong and have no problems making weight and I want to look good out there.”