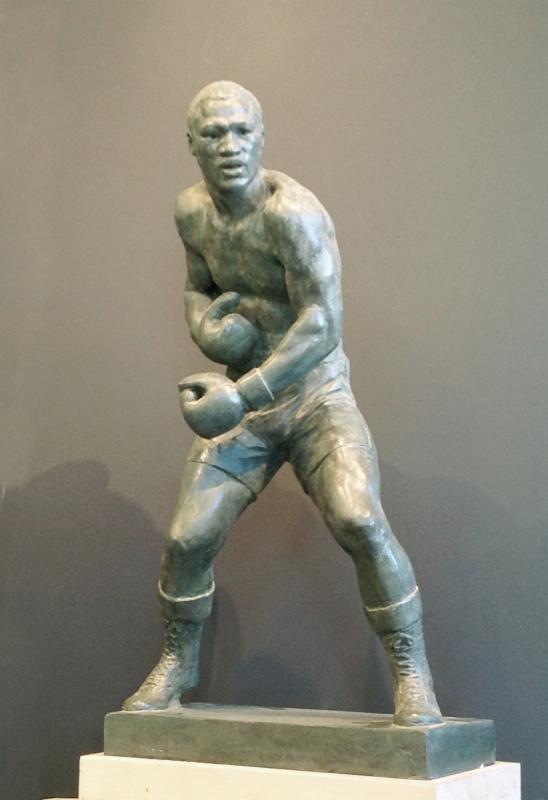 PHILADELPHIA (April 3, 2014) – IBF Light Heavyweight World Champion Bernard
“The Alien” Hopkins is pleased to announce that he andGolden Boy Promotions have made a significant donation to fund the completion of the previously announced Joe Frazier statue that will stand nine feet tall outside of Xfinity Live in Philadelphia’s sports stadium complex (corner of Patterson and 11th Street). Hopkins, a friend of the Frazier family and a Philadelphia boxing legend in his own right, is set to once again showcase his fighting roots when he steps into the ring on Saturday, April 19 against WBA and IBA titleholder Beibut Shumenov at the DC Armory in Washington, D.C. live on SHOWTIME®.

“Seeing this statue built has meant a great deal to me for a very long time,” said Hopkins. “I have always felt strongly that Smokin’ Joe has a rightful place in Philadelphia history and that should be honored. We have a ‘Rocky’ statue and Rocky isn’t even real. Joe Frazier embodies the Philadelphia fighting spirit and I am so happy to be able to pay homage to him in this way.”

“When Bernard asked us to make a donation to help build the Joe Frazier statue in Philadelphia, we did not hesitate,” said Richard Schaefer, CEO of Golden Boy Promotions. “We firmly believe in preserving the great history and heritage of our sport and there is no better way than honoring some of the legends that have paved the way for the fighters today. Joe Frazier is one of the all-time greats and we are pleased to be a part of this project.”

The Frazier statue will become part of Philadelphia’s public works of art as voted on by Philadelphia’s Art Commission. The statue, designed by local artist Stephen Layne, will mirror Frazier’s reaction after knocking down Muhammad Ali during their 1971 title fight at Madison Square Garden in New York City, and is projected to be unveiled between Thanksgiving and Christmas of this year.

Members of the Frazier family will publicly thank Hopkins and Golden Boy Promotions for their contributions on Thursday, April 17 at the Hopkins vs. Shumenov final press conference at Hamilton Live (600 14th St. NW) in Washington, D.C.