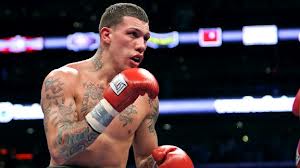 No matter what his win and loss record looks like, Gabriel Rosado is always in good fights and unlike most is willing to take on the best. He proved that when he moved up to fight Golovkin foregoing his junior middleweight title shot versus Cornelius Bundrage.

“When you talk about the GGG fight, GGG didn’t knock me out, I had bad cuts and the fight had to be stopped,” Rosado told ThaBoxingVoice.com. “Again, that was a fight I took prematurely. I underestimated him. He was the much bigger and better guy that night. I was still a legit 154 at that time; I gave up my number 1 ranking for the IBF and K9, which would have been a lot easier fight then GGG.”

Still after that loss Rosado says, “That was the fight where I gained fight fan’s respect. Till this day I’ve given him (Golovkin) his best fight. I’d like to fight him in the future because I feel like I’m a lot bigger, and I’m a lot more experienced,” explained Rosado.

Even after that fight Rosado went on to fight J’Leon Love and Peter Quillin at the middleweight level, a weight Rosado says he has grown into.

“I think once I fought Love and Kid Chocolate, I grew into a natural middleweight and those are fights I thought that I would win and was winning. I felt like I beat Love and thought I was on my way to beating Kid. Right now I’m on another level as a fighter. I got a new coach in Jessie Reid as my trainer and we’re working on some new things now.”

The things he’s working on are going to prepare him for what will likely be a fight of the year candidate this November when he stares James Kirkland down in the ring on the undercard of Bernard Hopkins vs. Sergey Kovalev. It’s a fight that will take place at 157 pounds, 3 lbs. north of where Kirkland fights and 3 below where Rosado resides. Even though Rosado now says he feels like a natural middleweight, he doesn’t think making weight will be an issue.

“My last camp was very disciplined with the diet,” explained Rosado. “For my last training camp I was able to eat 3 meals. For the weigh in, the day of the weigh in I was able to eat breakfast and made 160. Kirkland says he’s 54 but I think he’s really a middleweight because word is he blows up to 200 lbs. He didn’t want to fight at the 160 limit. He wanted the catch weight. I’m on top of my weight,  so it shouldn’t be a problem.”

However the problem for Rosado might be if he lets James Kirkland out of the 1st round as Tha Boxing Voice’s Nestor Gibbs eluded too. But Rosado says people get to caught up in the Kirlkland trap and he won’t allow Kirkland to do the same to him.

“I definitely want to win the fight by knockout. I think Vera has the better chin,” stated Rosado. “He fights dudes that get caught up in his fights and overwhelmed by his pressure. Glen Tapia is not experienced. He’s a young kid with a lot of talent but he’s not experienced. He had Kirkland hurt in the first round but then he started playing the ropes. He started letting Kirkland bang at him. “

When it was mentioned that Kirkland put Tapia on the ropes in their bout, Rosado cut in and stated, ”You get put on the ropes if you allow someone to put you on the ropes. Even when I fought GGG, I was still moving even with a bloody eye I couldn’t see and GGG never put me on the ropes. You have to know how to use the ring.”

The fact that he feels others feel that Kirkland will bulrush him only gives Rosado that edge, the edge he will need to knock out Kirkland.

“I like that people think Kirkland’s the bull because it’s just motivation to prove them wrong. That’s what makes the fight interesting. He’s aggressive and coming off a knockout win and so am I. As a fan I would buy tickets. In the main event you got Bhop and Kovalev, definitely a fight fan’s card.”