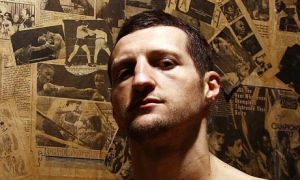 Here’s my round by round analysis of the Lucian Bute vs. Carl Froch fight in Nottingham, UK. Bute will be trying to solidify his stature as 1 of the top tier super middle weights in the world and Froch will try to continue his extremely tough stretch of facing 6 champions in a 7 fight stretch before he moves to the 175 lb light heavyweight division, when he will eventually have a rematch with Jean Pascal. Now, let’s get straight to the analysis.

Round 1: Feeling out rd for the 1st min, and Froch lands the 1st right hand. Bute showed good head movement and even though he was caught with the 1st 2 hard shots of the rd, he came right back landed a night hard left. It was a good 1st rd that I’m going to give to Froch just off activity, plus I expect Froch to win the close rds at home.  Froch 10-9

Round 2: Froch trying to just test the jab a bit, but it wasn’t effective, more pawing than sticking it. Froch landed a hard right that caused Bute to hold. Then Froch caught Bute with a hard straight jab in the last 20 seconds of the rd. I felt he landed the cleaner, more effective shots and rd and is now up 2 rounds to 0. Froch 20-18

Round 3: Bute takes some BIG shots in rd 3, tried to act like he wasn’t hurt and then Froch UNLEAHED on him, for the last 2 and half minutes of the rd, just pounding Bute. He showed a lot just to hang on for the round because he was completely pounded for that entire rd. Just a DOMINATE rd by Froch, probably a 10-8 rd, easily up 3 rounds to 0. Froch 30-26

Round 4: Much of a nothing rd because Froch needed to rest after all the shots he threw last rd and Bute needed time to recover after getting pummeled the last rd. Neither rally threw much until the last minutes, but I think the last 30 seconds Froch won the rd. Bute’s legs are gone, I’m expecting this to be stopped by the ref next rd. Froch 40-35

Round 5: Froch attack early and has Bute on the ropes and is pounding Bute again, looks like he’s going to be put down and the ref steps in as Bute hangs on the ropes to stop the fight, this one is over 1 min and 5 seconds into the 5th rd. Carl Froch ends Lucian Bute by TKO and is now the new IBF Super Middleweight Champion, his 3rd championship.

Just to clarify, what was a slightly weird ending, the ref did not stop the fight when Bute was on the ropes, he said the ropes held him up and counted it as a knockdown. Everyone jumped in the ring as if it was over, which could have been a disqualification on Froch’s side, but then Bute’s trainer came in the ring and told the ref to stop it, as there was no need to count. The result is still the same though, and Carl Froch defeats Lucian Bute by a 5th rd TKO, and may now be headed for 1 of 3 matches, either a rematch with Ward next yr, a rematch with Kessler, or a rematch with Pascal. I expected Bute to win, and he DOES have a contractual rematch clause in Canada if he chooses, but as for now, I would like to say congrats to Froch, your new IBF Super Middleweight Champion.