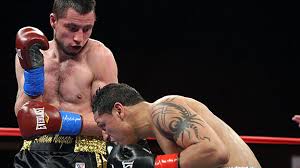 The August 15 edition of ESPN Friday Night Fights presented by Corona Extra and ESPN Deportes’ Noche de Combates presentado por Corona Extra will feature an IBF eliminator between Lightweight contender Rustam “The Mongoose” Nugaev (27-6-1, 17 KOs) and former Lightweight title challenger Denis “Ghengis Khan” Shafikov (33-1-1, 17 KOs). The winner of the 12-round fight will be ranked No. 1 by the IBF and become the mandatory challenger for IBF Lightweight titleholder Miguel Vazquez. Friday’s show from the Chumash Resort & Casino in Santa Ynez, Calif., will air live at 9 p.m. ET on ESPN2, broadband Spanish-language ESPN Deportes+ and WatchESPN. ESPN Deportes will air the fights on Saturday, August 16, at 8 p.m. The card is promoted by Gary Shaw Productions.

Main Event:
Los Angeles’ Nugaev has won his last five fights, including a fourth-round TKO over Marvin Quintero on Friday Night Fights in March. Shafikov, who hails from Russia, is looking to rebound from a 12-round unanimous decision loss to defending titlist Vasquez.
“Shafikov recently fought for the IBF world title but came up short against Miguel Vasquez,” Nugaev said. “That is his only loss, so I know he can fight. He does a lot of things well in the ring, and I’m going to have to be smart when we fight. I feel I have the power to slow him down and get him out of there before the final bell rings. This will be an all-out war and the fans will be pleased with my performance.”

· For the latest ESPN.com boxing news and analysis follow @ESPNBoxing.