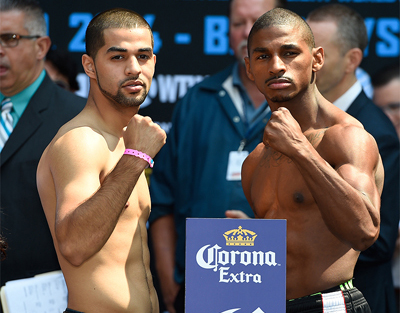 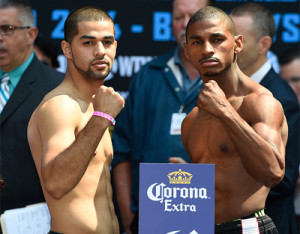 “In boxing you are going to get hit sometimes.” Sadam Ali said after his win Saturday in Brooklyn, New York. The undefeated Ali found himself in his toughest test to date against Jeremy Bryan, whom even Ali admits had him hurt. “Yeah, I was hurt…but I recovered and finished well.” Ali said with a shrug of his shoulder. “I felt it [the punch], but my legs were not completely there, but I was mentally.”

Fighting just weeks after the end of Ramadán, Ali explained that he definitely felt the wear of his religious observation upon his body yet finished by saying “…but now I am just making excuses.” It was as if he could already read the ready-made internet journalist story ready to be molded from those phrases and killed any dialogue of trouble before it could be announced. “You live and you learn. I didn’t feel bad before I went in the ring.” Ali explained as he seemed shocked at how his body reacted.

“One thing about me is I know how to hold at the right time, sometimes you hold and you get hit.” Ali reflected upon getting hurt in the fourth round. The win doesn’t come without slight discomfort due to the fact that the card as a whole was viewed as a showcase fight card setting up bigger match-ups in the future. It was a match up that saw Ali, the recent Golden Boy promotions signee and former 2008 Olympian, taken to great length and into what one might say the deep water.

“I knew the fight was close…but I thought I won.” Ali commented when asked about the scores which were narrowly in his favor. “I just want to perform better next time…I would give myself a 6 and a half honestly.” Ali stated in the media scrum as words slowly became a jumble with a frantic pace of questions heading his way. Ali seemed to gain traction later in the fight as he floored Bryan in the eighth round and showed grit to pull out split decision victory.

What’s next for Ali? When asked if he would like to return on the Bernard Hopkins vs. Sergey Kovalev fight card Ali simply stated “…it would be nice” The 25 year-old Brooklyn, New York native and the son of Yemeni immigrants also simply explained time is on his side and that he is still young. “Maybe some time back in October, I am not sure what Golden Boy has for me, but I will be ready.”