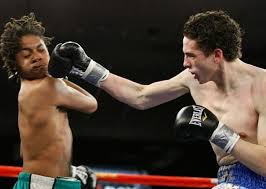 Gilbert Alex Sanchez gets the fight he has been asking for when he takes on unbeaten Thomas “Cornflake” LaManna in an all-New Jersey battle on Saturday evening, Dec. 13, at the 2300 Arena in South Philadelphia.

Topping the card are a pair of eight-round fights featuring lightweight Felix Verdejo, of San Juan, Puerto Rico, vs. Karim El Ouazghari, of Barcelona, Spain, and super middleweight Jesse Hart, of Philadelphia, vs. Samuel Miller, of Arboletes, Colombia. Those two matches will be televised as part of Top Rank’s Solo Boxeo Tecate series on UniMas. The delayed telecast will begin at midnight (EST). First of seven prelims begins at 6.45pm.

Sanchez, 31, of Camden, NJ, is only 4-5-1 as a pro with two knockouts, but he claims the road he has traveled has been much harder than the one taken by LaManna, whose 15-0 record includes seven K0s.

“Records don’t mean a thing,” said Martin Diaz, who manages and trains Sanchez. “We’re always the opponent; we never get to pick and choose the kind of guys that LaManna fights. We wanted eight rounds for this fight and 158 pounds but we were forced to settle for six rounds and 160 pounds.

“We also got a lot of bad decisions. Alex beat Fred Jenkins, Jr., nasty for six rounds in March and they gave Jenkins the decision. Why? Favoritism, I guess. Why doesn’t LaManna fight Jenkins? He just gets the right fights to build his record. We never had that luck. Look at the poster for this fight. They have LaManna’s picture on it and they don’t even put Alex’ name on the poster.

“LaManna only fought one solid guy and that was Jamaal Davis in his last fight (Aug. 23) and Davis didn’t really come to fight that night. If he had, he would have won.”

In his last fight Aug. 23 at Bally’s, Sanchez got off the floor in the first round and fought unbeaten Ismael Garcia, of Atlantic City, NJ, to a standstill the rest of the way before losing a six-round decision.

The combined record of Sanchez’ 10 opponents was 42-22-1. Five of the 10 were unbeaten at fight time. Among then is world-rated Tony Harrison, of Detroit, currently 18-0.

The combined record of LaManna’s 15 victims is 74-65-3 and he comes into this fight off the two biggest wins of his career, a pair of eight-round decisions over Ahsandi Gibbs and Davis.

The Dec. 13 fight will be LaManna’s first in Philadelphia. Sanchez has boxed there once previously, a four-round decision earlier this year over Juan Aguirre, of Jacksonville, FL.